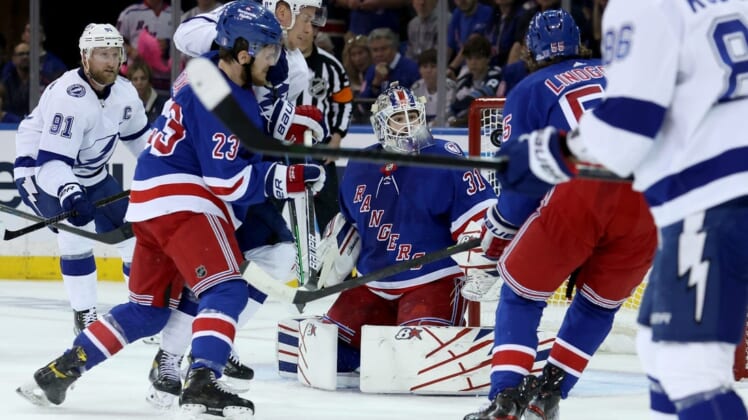 NEW YORK — Ondrej Palat’s tip-in snapped a tie with 1:50 remaining in regulation and the Tampa Bay Lightning beat the New York Rangers 3-1 on Thursday night in Game 5 of the Eastern Conference finals.

Tampa Bay leads the best-of-seven series three games to two and can secure its third straight trip to the Stanley Cup final Saturday night at home.

The Lightning are 6-1 at home in the postseason while the Rangers head into their sixth elimination game with a 2-7 road mark in the playoffs.

Rangers defenseman Jacob Trouba lost the puck in the left faceoff circle to Steven Stamkos. Tampa Bay’s Victor Hedman then moved the puck to Mickhail Sergachev, who fired a long wrist shot from near the right point. The shot sailed through traffic, was touched by Palat and went over goalie Igor Shesterkin.

Sergachev notching a tying goal in the second period, and Tampa Bay’s Brandon Hagel added an empty-netter with 59 seconds to go. Lightning goalie Andrei Vasilevskiy continued his turnaround from the first two games by delivering a 24-save performance.

New York defenseman Ryan Lindgren scored midway through the second period and Shesterkin stopped 24 shots for the Rangers, who face their third three-games-to-two deficit of the postseason.

After a scoreless opening period, the teams traded unassisted tallies in the second.

Lindgren opened the scoring for New York at 10:29. Sergachev tied it at 17:34, getting his first postseason goal since Game 5 of the 2020 Stanley Cup final.

Eight seconds after New York’s Tyler Motte pressured Tampa Bay defenseman Zach Bogosian into a giveaway in the right corner, the puck caromed to Lindgren. Lindgren gained possession along the left boards and lifted a rising wrist shot from the left circle over Vasilevskiy’s right shoulder.

Tampa Bay tied it on its 16th shot of the game three seconds after New York’s Kevin Rooney committed a giveaway behind the net. Sergachev capitalized on the miscue by lifting a wrist shot from near center ice through traffic and past the left arm of Shesterkin, who was screened in front by two of his own teammates and Tampa Bay’s Corey Perry.