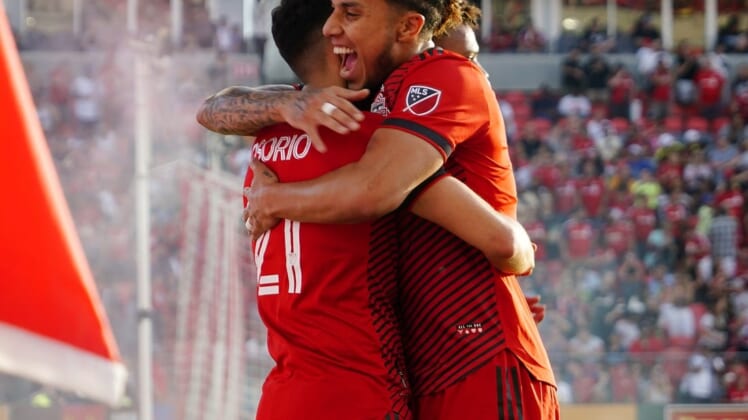 Ralph Priso-Mbongue’s impressive goal in the 78th minute was the difference as host Toronto FC held off Atlanta United FC for a 2-1 victory on Saturday night.

It was the first goal of the season for Priso-Mbongue, and just the second of his MLS career. The timely strike from the homegrown Canadian midfielder gave Toronto (5-8-3, 18 points) its fourth win in its last five games across all contests.

Atlanta (5-6-4, 19 points), meanwhile, has won just one of its last five league matches. The Five Stripes were unable to capitalize off Toronto’s mistakes and failed to create meaningful goal-scoring opportunities.

Priso-Mbongue’s decisive goal came off an error by Atlanta.

After a corner kick, Toronto midfielder Michael Bradley tried to play a short pass into the box, but Atlanta defender George Campbell slid in to knock the feed away. However, from Campbell’s slide, the ball rolled right toward Priso-Mbongue, who was perched atop of the box in the semi-circle. The midfielder approached the ball and — without taking a first touch — unleashed a left-footed shot that banged against the back of the net.

Toronto’s first goal of the match came in the eighth minute. After some build-up from Jayden Nelson and Luca Petrasso, the ball landed at the feet of Jonathan Osorio. He danced through a pair of Atlanta defenders in the penalty box with a few deft touches, then fired a shot past Atlanta keeper Rocco Rios Novo.

It was the fourth goal of the season for Osorio.

Atlanta didn’t put a shot on goal in the first half, but finally found the back of the net after halftime. In the 57th minute, Luiz Araujo received a pass from Franco Ibarra and streaked up the middle of the field toward Toronto’s goal. After getting by Reds defender Chris Mavinga, he flicked a soft shot over a frozen Quentin Westberg.

It was the fourth goal of the season for Araujo and the first assist of Ibarra’s MLS career.

Atlanta was short-handed before the match began, as starting winger Brooks Lennon was carried off the pitch during warmups. The club did not say what Lennon’s injury was.