Jordan Siebatcheu scored in the 89th minute to give the U.S. men’s national team a 1-0 victory over Honduras in a semifinal of the CONCACAF Nations League on Thursday in Denver.

Siebatcheu entered in the 78th minute and scored his first goal in his fourth U.S. match with a diving header from a one-bounce flick by Weston McKennie.

The Americans advanced to the final Sunday in Denver against the winner between Mexico and Costa Rica later Thursday.

Zack Steffen made three saves for the U.S. None was bigger than in the 51st minute after defender Sergiño Dest kept Anthony Lozano onside. Lozano had a 50-yard sprint before Steffen charged out 12 yards to make a kick save on the breakaway attempt.

The first half didn’t produce goals but was still eventful. The Hondurans came within inches of breaking the deadlock in the 27th minute. Steffen misjudged a cross and Alberth Elis was at the right post to head the ball toward the open goal. 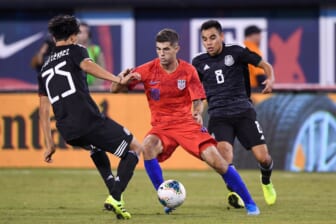 Also Read:
Christian Pulisic in line to start in return to USMNT

Forward Josh Sargent raced in and headed the ball away. Three minutes later at the other end, Sargent put a header from a cross by Antonee Robinson for a save by Luis López.

The Americans’ first and best chance until their goal came in the seventh minute when Gio Reyna zigzagged through the box only to put his shot a foot outside of the left post.

U.S. coach Gregg Berhalter made three changes from the lineup that lost 2-1 at Switzerland on Sunday: Steffen, Robinson and midfielder Christian Pulisic.

The 11 starters averaged 23 years, 259 days for the second youngest lineup for the U.S. in an official competition, bettered only by the 23 years, 172 days for a match against Colombia on July 5, 2007.

Although they played for the U.S. before in friendlies, Reyna, Robinson, Siebatcheu, Brenden Aaronson and Mark McKenzie earned their first appearances in official competition.