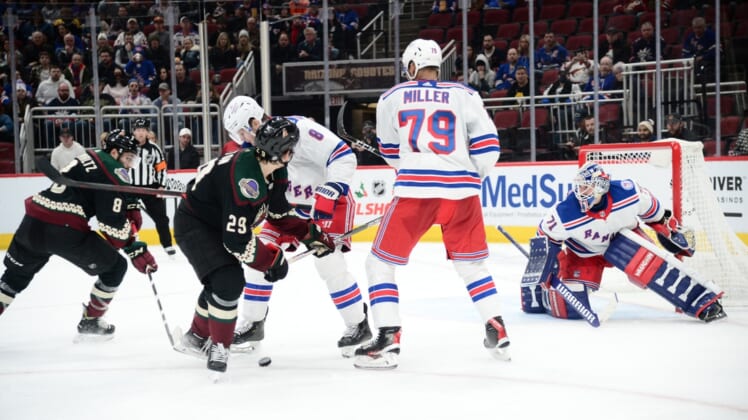 Kappo Kakko scored his second goal of the game during a power play with 2:18 remaining in the third period and the visiting New York Rangers rallied for a 3-2 victory over the league-worst Arizona Coyotes on Wednesday night in Glendale, Ariz.

Kakko was on New York’s first power-play unit because Artemi Panarin left the game for undisclosed reasons after playing the first period and just one shift in the opening minutes of the second period.

At 17:01 of the third period, Arizona was penalized for having too many men on the ice.

On the ensuing power play, the Rangers maintained possession and were able to effectively move the puck around. Defenseman Adam Fox whipped a pass to Ryan Strome, who quickly dished the puck to Chris Kreider at the right side of the crease. Kreider moved the puck to Kakko, who slipped by Arizona’s Lawson Crouse and put the puck under goalie Scott Wedgewood.

Kakko scored the first goal for the Rangers midway through the second period. Mika Zibanejad got the primary assist on that goal, and he scored on a third-period power play.

New York goalie Keith Kinkaid made 29 saves in his season debut after going 9-1-1 with Hartford of the AHL.

Arizona took a 1-0 lead with 2:14 remaining in the opening period on Eriksson’s 11th career short-handed goal. Eriksson took a cross-ice pass from Keller and lifted a wrist shot from between the faceoff circles that hopped over Fox’s stick and trickled into the net before Kinkaid could dive back and smother the puck with his stick.

New York tied it during a delayed penalty on Arizona. Kakko got the rebound of Zibanejad’s one-timer from the left circle and swept the puck into the vacated side of the net.

Keller made it 2-1 at 8:47 of the third. He tucked a backhander over Kinkaid’s left pad.

The Rangers tied it when Zibanejad lifted a wrist shot from the right circle at 14:14 of the third. The puck sailed past Wedgewood, who was screened by Kreider.