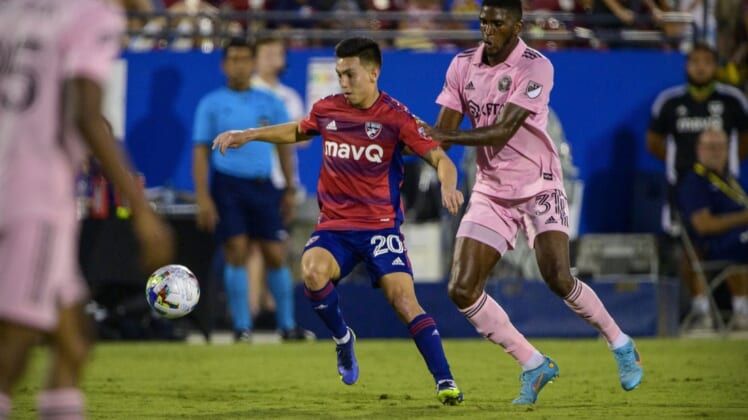 Leonardo Campana’s goal in the 89th minute lifted visiting Inter Miami to a 1-1 draw with FC Dallas on Monday in Frisco, Texas.

Inter Miami (6-7-4, 22 points) waited until the final moments to split the points with FC Dallas, which fell to 0-2-1 in its past three home matches. Dallas has not won on its home pitch since beating the Seattle Sounders 2-0 on May 7.

Alan Velasco scored Dallas’ goal on a direct free in 27th minute, giving the home side the early lead.

Campana, who entered as a substitute in the 61st minute, was waiting in the goalmouth to head home a pass from teammate Robert Taylor that was deflected by Dallas defender Matt Hedges.

Campana quickly pounced on the shoulder-high chance, directing it down into the near corner of the net beyond the reach of Dallas goalkeeper Maarten Paes.

Miami had been shut out in its previous four road matches, going 0-3-1 in that span. The Herons’ most recent goal away from home had come in a 1-0 win over Seattle on April 16.

The game’s first goal was set up when Velasco earned a free kick by getting fouled just outside the box by Miami defender Damion Lowe. He made the most of his chance, using his right foot to curl a shot around the defensive wall and into the right side of the net just beyond the reach of a diving save attempt by goalkeeper Drake Callender.

Dallas (7-5-6, 27 points) has two draws and two losses in its past four matches and has won just once in its past seven outings. Monday’s draw mirrored a 2-2 result on June 25 on the road against Austin FC in which Dallas led late in the game but conceded in the final minutes and was forced to settle for a tie.