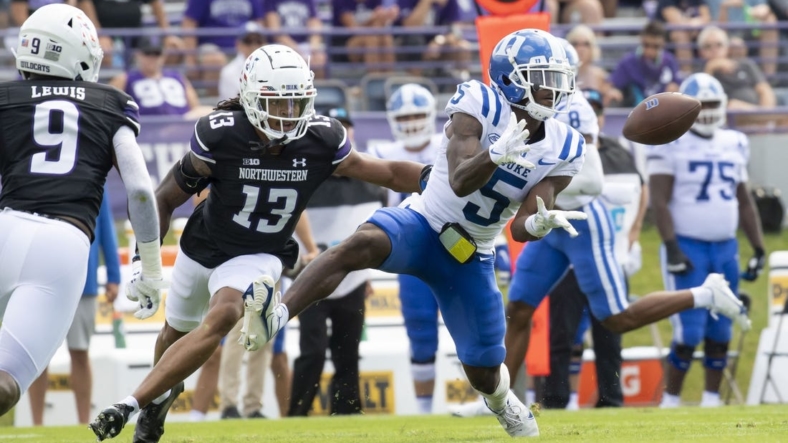 Riley Leonard threw for 240 yards and a fourth-quarter touchdown Saturday while the Duke defense came up with a dramatic stop to seal a 31-23 nonconference win over host Northwestern in Evanston, Ill.

Evan Hull was about to score a touchdown with 12 seconds left for the Wildcats (1-1) that would have allowed them to try a 2-point conversion to tie the game. But Hull was popped by safety Jaylen Stinson near the goal line, lost the ball and Brandon Johnson recovered for a touchback that sealed the game and improved the Blue Devils to 2-0.

Leonard hit Jordan Moore for an 8-yard strike just 1:27 into the fourth quarter for a 28-16 lead. Northwestern got within five on Ryan Hilinski’s 14-yard touchdown pass to Donny Navarro with 5:49 left, but Charlie Ham booted an 18-yard field goal for Duke at the 1:18 mark.

Hilinski completed 36 of 60 passes for 435 yards with two touchdowns and an interception. Hull caught 14 passes for 213 yards while running for 65 yards.
Duke established a 21-0 lead by the second play of the second quarter. The Blue Devils initiated scoring less than five minutes into the game on a 16-yard touchdown run by Jaylen Coleman.

It became 14-0 at the 3:17 mark as Jordan Waters scored on a 42-yard gallop. Waters upped the lead to three touchdowns with a 3-yard run less than a minute into the second period.

At that point, Northwestern finally displayed some resistance. Evan Hull got the Wildcats on the board with 11:18 left in the half on a 6-yard run. Adam Stage supplied a 34-yard field goal in the last minute of the half, drawing the Wildcats within 21-10 at intermission.

Hull made the game closer with 1:50 remaining in the third quarter, taking a Hilinski pass 39 yards to pull Northwestern within 21-16.