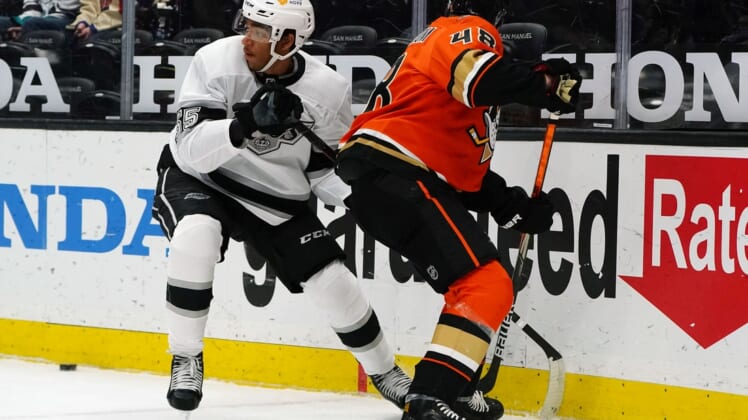 Lias Andersson and Anze Kopitar scored in the final 5:04 on Friday as the Los Angeles Kings rallied for a 2-1 victory over the host Anaheim Ducks.

Kopitar’s game-winner came with 56 seconds remaining for his 997th career point, all with the Kings over 15 seasons.

Haydn Fleury scored less than six minutes into the game for the Ducks, who relied on youth and nearly pulled off the victory while leading for much of the game.

Without much to show for their effort, the Kings were able to tie the game at 14:56 of the final period on Andersson’s third of the season, off a backward between-the-legs pass from Gabriel Vilardi.

The Kings kept up the pressure until Kopitar found a loose puck in front of the Ducks goal and left his feet to score past Anaheim goaltender John Gibson.

The Ducks played without captain Ryan Getzlaf, who was a healthy scratch for rest, and veteran Adam Henrique, who remains in COVID-19 protocol.

Instead, Anaheim leaned on youth like 20-year-old Trevor Zegras, who was playing in just his 19th career game and just his second at center following his return from the AHL. He had an assist on Fleury’s early goal, just his eighth career point. The Ducks also turned to 21-year-old center Isac Lundestrom and 23-year-old center Sam Steel.

The Kings are also blending in youth with 18-year-old Quinton Byfield playing in his second career game. Byfield played 17 minutes Friday after he played 18 in his debut Wednesday when the Kings fell 3-2 to the Ducks.

Gibson made 23 saves but will be an observer when the teams play their season-series finale Saturday. The Ducks have announced that retiring veteran Ryan Miller will be in net for Anaheim’s final home game of the season.

While the Ducks already have been eliminated from playoff consideration, the Kings remain alive but are fading fast. Los Angeles remains eight points behind the fourth-place St. Louis Blues with eight games remaining.

The Kings improved to 4-2-1 against the Ducks this season and 2-1-0 in a four-game home-and-home series between the rivals that concludes Saturday.