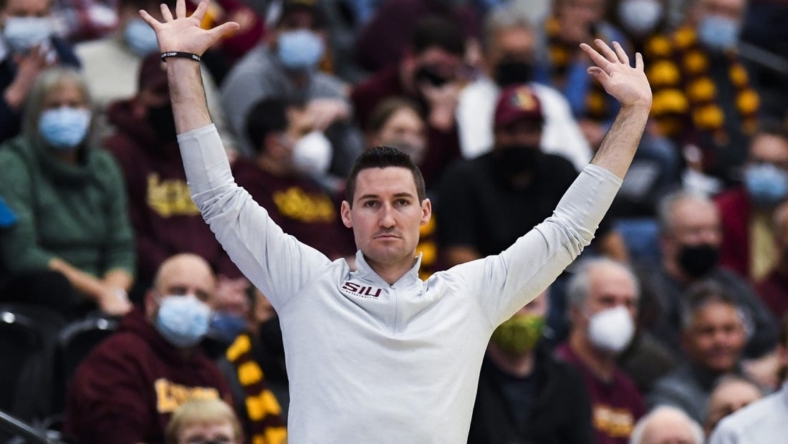 The Cowboys had two chances to win the game, and they committed a turnover on their first. After Southern Illinois’ Troy D’Amico missed the front end of a one-and-one, Bryce Thompson’s 17-footer from out top went begging just before the buzzer.

Lance Jones scored a game-high 19 points for the Salukis (2-0), including seven in a row after Oklahoma State (1-1) owned a 59-51 lead with four minutes left.

Domask finished with 16 points, seven rebounds and four assists. Southern Illinois won despite making only 38.3 percent of its field-goal attempts, including 9 of 31 3-point tries (29 percent), and getting outrebounded 43-31.

Thompson and Avery Anderson III scored 14 points each for the Cowboys, while Caleb Asberry came off the bench to net 13. Moussa Cisse added 11 points and a game-high 15 rebounds, but he missed three key foul shots in the final minute.

Oklahoma State made only 8 of 16 foul shots and committed 14 turnovers, canceling out its major advantages in size and quickness.

Southern Illinois got off to a fast start in the first seven minutes, using solid defense and the 3-point arc to build a 13-4 lead when Dalton Banks scored in transition at the 13:39 mark. The Salukis made three 3-pointers and hung with their taller opponent on the boards.

Oklahoma State finally got going on offense when Asberry came off the bench and drilled consecutive 3-pointers. The treys started a 12-2 run that gave the Cowboys their first lead of the game at the 8:05 mark on a short jumper by Cisse.

Anderson contributed six straight Oklahoma State points later in the half to give the Cowboys their biggest advantage at 25-19. After Southern Illinois drew within 30-28 on an AJ Ferguson corner 3-pointer in the last minute, Asberry sank one more trey to make it 33-28 at intermission.