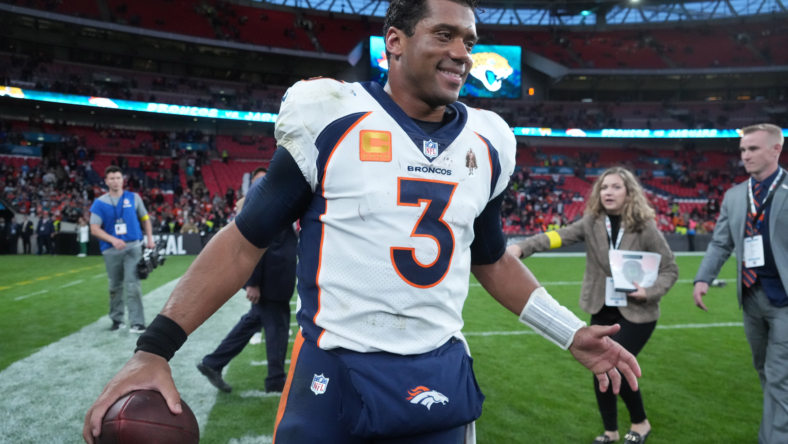 Latavius Murray rushed for a 2-yard touchdown with 1:43 remaining in the fourth quarter to lift the Denver Broncos to a 21-17 win over the Jacksonville Jaguars on Sunday in London.

Russell Wilson returned from a nagging hamstring injury that kept him out of Denver’s 16-9 loss to the New York Jets on Oct. 23. He completed 18 of 30 passes for 252 yards with a touchdown and an interception.

Murray’s score allowed the Broncos (3-5) to move ahead, and K’Waun Williams sealed the victory by jumping in front of Jaguars receiver Christian Kirk to pick off Trevor Lawrence on the ensuing possession.

Lawrence, who threw two costly interceptions, completed 18 of 31 passes for 133 yards and one touchdown.

The Jaguars (2-6) lost their fifth straight game overall and ninth in a row by one score. All six of their defeats this season have been by a one-score margin.

Jacksonville kept things close thanks to another productive rushing outing from Travis Etienne, who ran for 156 yards and a touchdown on 24 carries.

Jacksonville took the lead on its previous drive with 3:54 left in the fourth quarter after Etienne scored on a draw play from 1 yard out.

But Wilson led Denver back with a 7-play, 80-yard drive which began with a 47-yard pass down the sideline to KJ Hamler.

Lawrence’s first interception came in the first half on a play that could have put Jacksonville ahead by two scores. After driving to the Denver 1-yard line, Lawrence rolled out to his right near the sideline and fired a ball into the end zone, but Justin Simmons leaped and intercepted the pass.

The play swung the momentum in Denver’s favor.

Murray led all Broncos rushers with 46 yards on 14 carries, but Denver collectively ran for 101 yards. Melvin Gordon III also scored a touchdown and finished with 29 yards on nine carries.