Last but not least as A’s face Nationals 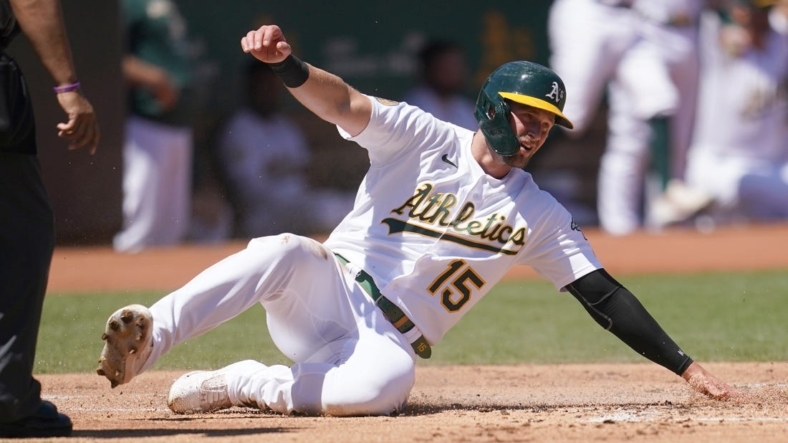 But the A’s should have a jolt of confidence after seeing how they can compete against an elite team. They earned a split of a four-game series over the New York Yankees this past weekend.

Oakland now begins a three-game road series against the Washington Nationals on Tuesday night. It will be the only meeting of the season between the teams.

If the A’s can maintain their mojo, they will have a chance for their first winning streak of more than two games in a month.

“We’ve got a team full of competitive guys,” Oakland first baseman Seth Brown said after the A’s won the final two games of the series against the Yankees. “When we put it together like we have the last couple of games, good things happen and we can compete with anybody. It’s good to see and it’s good to be out here with these guys competing.”

The A’s are far from a polished team, but they do not lack for energy in advance of a six-game road trip at Washington and Baltimore.

“Everybody out here competes their butts off,” Brown said.

The Nationals avoided a series sweep by beating the Cincinnati Reds 3-2 on Sunday.

Both teams had Monday off.

Oakland has the second-worst record (48-61) in the major leagues, ahead of only Washington (43-85), which struggled during the weekend against lowly Cincinnati.

The Nationals have lost five of their last seven games and have failed to score more than three runs in any of those contests. It has been more than a week since they posted any significant offense in a 6-3 victory at San Diego on Aug. 19.

Putting together better at-bats is the first order of business for the Nationals.

“I’ve got confidence in all these guys,” manager Dave Martinez said. “We didn’t chase as much (on bad pitches) as we did the (previous) games.”

The Nationals like some of the power they’re seeing offensively from infielder Ildemaro Vargas, who holds a strong defensive reputation. He homered for the third time in a nine-game stretch Sunday.

“If he starts hitting like that, he’s valuable to us,” Martinez said.

Left-hander Cole Irvin (6-11, 3.16 ERA) will get the start for Oakland. Irvin lost four consecutive starts before his no-decision Wednesday with seven shutout innings and 11 strikeouts against the Miami Marlins.

Irvin has been durable with 11 straight outings of six or more innings.

The Nationals turn to right-hander Erick Fedde (5-8, 4.88), who will make just his second appearance of August. He came back from the injured list last Tuesday to deliver five solid innings, giving up two runs in a no-decision at Seattle. He hasn’t earned a win since June 21.

Irvin gave up three runs across a total of two innings in two career relief appearances against the Nationals in 2019, when he was pitching for the Philadelphia Phillies. Fedde has never faced the Athletics.

This week’s games mark Oakland’s final trip of the season to the East Coast.