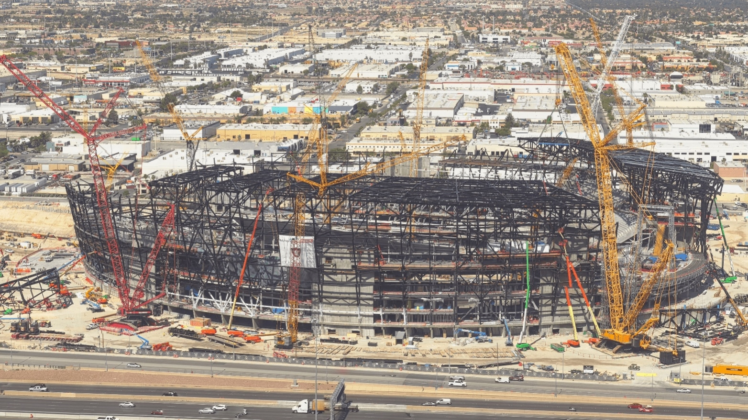 Despite a soft month in hotel tax revenue for March 2019, the stadium project’s financials remain strong and the project is full-steam ahead but not without challenges against its aggressive timeline.

The Las Vegas Stadium, future home of the Las Vegas Raiders NFL franchise, remains on time and on budget for completion at the end of July 2020 the stadium’s governing body reported today at its bi-monthly meeting.

$805.5 million of the projects $1.8 billion has already been spent with the project sitting at 44-percent funded with more than a year of construction left. In addition, although March projections for hotel tax revenue – how the public portion of the stadium is funded – were lower than forecasted, overall for 2019, the fund stands at 0.7% above projections with a surplus of $244,000.

Hotel tax revenue for March was nearly six-percent below projections according to the report delivered by Jeremy Aguero of Applied Analysis called. It marked the first time since September 2018 hotel tax revenues fell short of projections.

Despite that, the debt waterfall fund for the Las Vegas Stadium stands at 57-percent funded $51.2 million of the target $90 million. This fund was established to protect the state’s investment in the unlikely result hotel taxes could not pay off the debt from the project. The debt fund is projected to be fully funded by the end of the project’s 2019 fiscal year.

In the weeks leading up to today’s meeting, the Regional Transportation Commission of Southern Nevada, the Nevada Department of Transportation and Clark County indicated they will form a new committee to create a communications plan for roughly the 6.5 miles around the stadium. This is in addition to the Raiders own plan which has consisted of the use of satellite parking lots throughout the area.

The Stadium District Transportation Committee is slated to meet sometime in June.

Today’s Las Vegas Stadium Authority meeting didn’t produce any new conclusions but the team said it continues to have discussions with groups in the area to look for options for fan parking on game day.

Stadium Event Co. Chief Operating Officer Don Webb did say the team is looking for real estate to acquire in the stadium vicinity and looking for parking co-op opportunities with neighboring businesses.

“By working with neighboring business who want to participate,” Webb said. “Our goal is that has a uniform look and feel for marketing, pricing, office, security and all of that it becomes a seamless experience for the Raiders fan or the concertgoer.”

Webb added the Raiders are in the final stages of completing their parking plan which they plan to share with the board and public in the next month or so.

As we’ve reported several times over the past few months, the project continues to move at pace and on schedule. With more than 1,200 workers now on the site, roof trusses continue to go up giving the stadium its distinctive look and are preparing for crews to begin placing the roof in the fall. Over half of the 26 canopy trusses have been installed with a tentative completion date for all to be erected by July 31, 2019, although Webb said that could be behind by about two weeks.

Webb did highlight challenges with finding the amount of skilled laborers the project needs to stay on its aggressive timeline. He specifically pointed out the shortage of iron workers but quickly added once the steel work on the structure is done, that need will tail off.

In addition, while not visible to the passers-by on Interstate 15, work inside the stadium is also progressing rapidly.

Despite the positive news, the project’s monthly report did caution delays are possible. While they might not delay the opening of the stadium in August of 2020, they could require additional steps should they come to fruition.

“While the Construction Monitor indicated that the project schedule remains ‘achievable considering the team involved,’ the April 2019 Site Observation Report cautions that there is now “zero float” in the project schedule,” the Stadco report says. “The Construction Monitor notes that the design-builder has identified 60 days of impact in structural steel deliveries and erection.

“This condition notwithstanding, the Construction Monitor noted further that MMCjv, the Design-Builder, has been working with the Structural Steel Subcontractor to coordinate multiple fabrication shops to ensure sequencing of materials through the fabrication manufacturing process, which caused a gap in deliveries and erection, that the design-builder has ‘directed its attention to the back end of the schedule to recover remaining days, however, gaining time pushes roof and exterior enclosure completion further out to the end of the first quarter of 2020, necessitating the creation of temporary roofs.”

The Construction Monitor has indicated that the critical target date to maintain the schedule is July 31, 2019, completion of the structural steel stadium ring within tolerance to allow the start of cable net roof installation.

Before fans and observers get alarmed, that warning is showing the transparency and rapid pace of the project. Stadium officials don’t believe they will miss any target dates. They stand firm on the project’s timeline.

Today’s report on the progress the Raiders and their partners have made with the important community benefits plan continue to impress.