Las Vegas Raiders Tickets Hottest and Priciest in the NFL 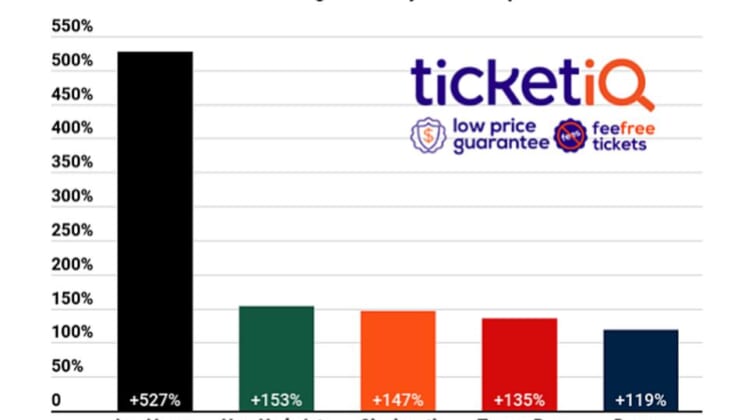 Las Vegas is a transient market they said. The NFL can’t work in Las Vegas they said. Well, if early prices on the secondary ticket market are any indication, the Las Vegas Raiders tickets are the hottest commidity in the NFL and their move is already a popular one.

The Raiders, who officially sold out their new $1.9 billion stadium for the entire 2020 NFL season months ago, are drawing the highest increase in prices on the secondary ticket market, according to a report by Forbes.com writer Shlomo Sprung.

Sprung, who joins the Silver and Black Today on CBS Sports Radio 1140 Sunday morning at 8 AM, says while it may be early, and much unknown about the NFL season amid the COVID19 pandemic, the combination of the Raiders brand, a new stadium, the destination of Las Vegas, and an improved product on the field has made ticket prices pop before summer even settles in.

According to Sprung’s piece, Raiders tickets on the secondary market have climbed a jaw-dropping 527% for their first season in the Silver State. Contributing to the fortuitous climb in prices is half of the Raiders home games in Las Vegas in 2020 will be primetime television matchups with future Hall of Fame quarterbacks Drew Brees, Tom Brady, Philip Rivers and the young face of the league Patrick Mahomes.

And while chatter amongst Raider Nation in social media has been a mixture of shock and hope ticket prices will come down after the initial spike, data suggests fans shouldn’t expect the prices to fall all that much.

According to TicketIQ data, which Forbes used to compile price information, “…NFL tickets on the secondary market have been steadily declining for the last several years.” This means more and more fans who acquire tickets are not selling them as much as the past. The NFL continues to not only be must-watch television, but games are must-attend events and ticket turnover is going down causing more scarcity.

“…the number of tickets on the secondary market has steadily declined and are at its lowest amount, down 84%, since 2013,” Sprung writes in Forbes. “Perhaps because of this decreased supply, the average ticket is up to $391, a 51.5% increase from the average in 2019.”

The Raiders average ticket price on the secondary market stands at around $1,100. The Broncos, also in the midst of a young rebuild of their roster, is second at just under $800. Dallas, Seattle and the New York Giants complete the Top 5 in prices thus far for 2020.

Undoubtedly, there is sticker-shock for those Bay Area fans who have enjoyed ticket prices in Oakland that ranked 21st league-wide in 2019. But with the new exciting locale of Las Vegas, a vastly improved roster, and the allure of the sparkling new Allegiant Stadium, the days of rolling up to a game and getting a cheap “get-in” ticket are gone.

Listen to our interview with Sprung Sunday on CBS Sports Radio 1140 beginning at 8 AM PT, streaming live on the Radio.com app and via video on YouTube.

What do you think? Will higher prices prevent you from attending more games in Las Vegas?