The Las Vegas Raiders will face the Miami Dolphins on Saturday in their third preseason game, an opportunity to keep improving as they pass the halfway point of training camp.

Not only is Las Vegas in the midst of playing three games in 18 days, but it heads into a stretch where it plays back-to-back games on six days of rest to conclude its preseason schedule.

After two preseason games, the Raiders are at the point where they’re now looking at players who can consistently produce a higher volume of positive plays. It’s going to be a crucial factor when making significant roster cuts on Tuesday.

In the first year with Josh McDaniels as head coach, Las Vegas has plenty of position battles taking place this summer. Among them is the No. 3 receiver role behind Davante Adams and Hunter Renfrow and Tyron Johnson is among the leaders in this heated competition.

In the team’s regular-season finale against the Los Angeles Chargers, Johnson made a key play on a punt return by hustling downfield and punching the ball out to create a turnover that led to a crucial touchdown in the 35-32 victory.

Now in his first full season with the Raiders, Johnson is looking to expand his role into the offense as he is building the trust with his coaches in order to get on the field. On Wednesday, he told reporters that he wants to be “consistent and dependable”, providing McDaniels with everything the coach preaches.

That mentality from Johnson has stood out in practice and has been able to set the stage for his teammates during training camp.

“Love his approach every day, he knows, and all our guys know that. That’s really the timeframe that we are at as a team. We all can do some good things, it’s when you get to September, you need to be able to do those things repetitively at a very high level.”

The backup quarterback competition between Nick Mullens and Jarrett Stidham is ongoing. Heading into a pivotal exhibition contest against Miami, this matchup could prove crucial to whether or not McDaniels and general manager Dave Ziegler want to keep two backups behind starting quarterback Derek Carr.

That topic of whether or not the Raiders keep three quarterbacks is still a few weeks away, but that question will start to arise as McDaniels and Ziegler build the 53-man roster.

It will be interesting to see who gets the start as Stidham has received the opening drive in the previous two games against Jacksonville and Minnesota.

The Raiders have youth within their offensive line, but they need consistency. It could be a deciding factor in getting the starting nod or getting a backup role in a few weeks.

As Las Vegas for the Dolphins, offensive line coach Carmen Bricillo said the starting unit is “nothing set in stone” and everyone in the organization believes the competition is bringing the best out of the players. 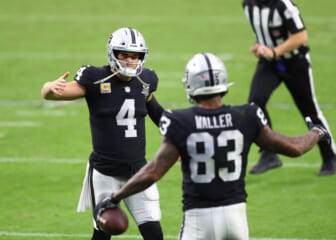 Also Read:
Las Vegas Raiders have four players on the first half of the NFL Top 100

Not only will the coaches be able to see that competitive edge on Saturday, but also next week as the Raiders will have joint practices with the New England Patriots, leading up to their Friday matchup in the preseason finale.

With a younger group compared to a veteran offensive line room, Bricillo has seen the energy and team aspect within a fledgling offensive line room with the mentality to prepare everyone for the entire season, not only the first regular season game in three weeks.

“At this point, I think it is unique and a challenge. They also bring some youthful exuberance. We had talked before about these guys working really hard. I really enjoy working with this group because of how hard they work and how eager they are to improve.”

Preseason games primarily give more opportunities to younger players. Defensively, one of those players is undrafted linebacker Luke Masterson.

“He’s playing both linebacker spots and as a rookie, he’s worn the green dot a little bit in these preseason games, which is not an easy thing to do right off the bat. He’s handling a lot of communication. He’s in the middle of every run play. Tough, active, works extremely hard in the weight room, works extremely hard to make sure his body is ready to go.”

One of the characteristics McDaniels is looking for to build out the roster is versatility. Although we have seen that more on the offensive side of the ball thus far, McDaniels has seen the value Masterson has brought about a month into training camp. Specifically, the Raiders’ coach loves the maturity and edge the rookie linebacker brings on special teams and that is important because as McDaniels said, “you better play a factor in the kicking game or it’s hard to get in the game on Sunday.”

The preseason games are like dress rehearsals for actors and actresses. The preseason not only benefits players, both young and old, in adapting to the NFL schedule.

Last week, the Raiders got to go through the process of logistically preparing for a home game at Allegiant Stadium. This week provides them with another opportunity to prepare for the grind of a full NFL season, figuring out the process each player and coach needs on a short week with travel.

This will also be a learning experience for the rookies putting on the uniform inside an NFL stadium like Hard Rock Stadium.

Whether it is deciphering what time to leave to the team bus for the airport or preparing on game day for a road matchup, these are all things players are crossing off their list heading into kickoff Saturday afternoon.

Further adjustments will also be made as the team goes on the road for the second time this preseason. This allows everyone to adjust and refine their schedule before, during and after the game.