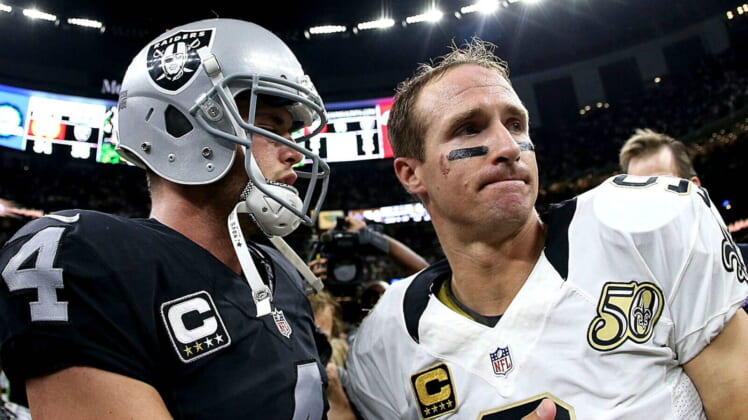 The NFL released the Las Vegas Raiders schedule Thursday and there were a few surprises and a slate filled with key matchups for a team building to win.

The NFL rolled out the 2020 season schedule. Although Las Vegas Raiders fans knew the opponents, the dates lay out the itinerary for the new year. Mark your calendars and make plans accordingly.

The Raiders won’t open the season at their new stadium, but their first opponent on the new field should bring fireworks. The Raiders schedule as the league will featuring the Silver and Black in four prime-time games, which include a home-opening Monday Night Football matchup, two Sunday night games and a December Thursday game.

We’ll go through six matchups that should catch your attention right away, starting with the season-opener against an upstart NFC South squad. You can check out the complete schedule on the team’s official website.

The Silver and Black will open the 2020 season on the road against the new-look Carolina Panthers, who hired head coach Matt Rhule out of Baylor.

We’ll see a duel between a pair of quarterbacks selected in the 2014 draft. The Minnesota Vikings selected Teddy Bridgewater four spots ahead of Derek Carr, though the former has bounced around the league after he dislocated his knee and suffered a torn ACL during a practice in 2016.

While Bridgewater could put together a Comeback Player of the Year campaign, Carr hopes to take another step in Year 3 under head coach Jon Gruden. He’ll have a chance to carve through a defense that underwent widespread changes during the offseason.

Although Carolina selected talented rookies in the early rounds of the 2020 draft such as defensive tackle Derrick Brown, edge-rusher Yetur Gross-Matos and safety Jeremy Chinn, it’s a young, unsettled group that needs to build chemistry. The Raiders will see a familiar face in linebacker Tahir Whitehead on the opposing side.

The Silver and Black shouldn’t overlook the Panthers, who are rebuilding, but the offensive continuity under Gruden should payoff in this matchup.

The Raiders will have to wait a week before their first game at Allegiant Stadium. However, as expected, the league made sure to highlight the game—in a marquee Monday Night Football matchup against the New Orleans Saints.

The Saints have ranked top 10 in yards and points every season since 2011. Gruden will have an early test to see how his revamped offense fares against a high-scoring squad. Fans in attendance could be in for an action-packed back-and-forth contest.

In the most recent meeting between these two clubs, the Raiders set the tone for the 2016 season. Carr engineered a fourth-quarter comeback, tossing a 10-yard touchdown pass to wideout Seth Roberts with 47 seconds left in regulation. Instead of sending out the special teams unit for an extra point, former head coach Jack Del Rio gambled on a two-point attempt. Carr found wide receiver Michael Crabtree for the go-ahead score.

Fast forward to the present; the Saints still have a stacked unit. The Raiders secondary has some question marks with rookie first-rounder Damon Arnette expected to start opposite Trayvon Mullen. Assuming he’s healthy, safety Johnathan Abram would suit up for his third NFL game in Week 2. Alongside him, newcomer Damarious Randall has to find his comfort zone.

Quarterback Drew Brees will roll into Allegiant Stadium with wideouts Michael Thomas and Emmanuel Sanders along with tight end Jared Cook, who spent the 2017 and 2018 terms with the Silver and Black, as his top perimeter pass-catching options. The Raiders may have to score 35 points to beat this team as they did in 2016.

The Raiders will travel to Kansas City coming off a home game with the Buffalo Bills and before their Week 6 bye.

Overall, Carr is 2-10 vs. the Kansas City Chiefs and 0-6 at Arrowhead Stadium. He won’t wait long to face arguably his biggest hurdle—a road matchup against the reigning champions.

Regardless of his performances through the first quarter of the season, critics will use this matchup as a barometer for Carr’s progression. He’s struggled on Chiefs’ territory. Furthermore, the road to an AFC West title and a Super Bowl could go through Kansas City.

Carr can’t beat the Chiefs alone though. Over the last two meetings between these clubs, Kansas City has outscored Las Vegas 75-12. The defense must do its part to level out this rivalry.

Defensive coordinator Paul Guenther doesn’t blitz often. His unit has done so on only 20.1 percent (24th) and 17.5 percent (31st) of plays in the 2018 and 2019 terms, respectively. With the added talent on the back end, perhaps the Raiders feel comfortable disguising some pass-rushers to pressure quarterback Patrick Mahomes into errant throws.

The Silver and Black will face quarterback Tom Brady in a Tampa Bay Buccaneers uniform, which seems a bit strange, but he’s still a viable threat. The game, played at home, is certainly one of the highlights of the Raiders schedule.

Brady will have a plethora of pass-catchers to target in the aerial attack, including Mike Evans, Chris Godwin, Rob Gronkowski, O.J. Howard and Cameron Brate. The defense must have all hands on deck for this matchup.

That means linebackers Cory Littleton and Nick Kwiatkoski must prepare to defend two-tight sets. At safety, Abram and Randall may have to drop down into the box to cover short passes to running backs Ronald Jones II and Ke’Shawn Vaughn or help out over the top against a pair of Pro Bowl wide receivers.

Remember all the rumors that connected Brady to Vegas during the offseason? Carr has a chance to upstage the quarterback many thought would replace him.

The New York Jets finished the 2019 campaign with a 7-9 record, so why is this a crucial matchup?

Last year, the Silver and Black went to MetLife Stadium and laid a big egg, going down 34-3, tying their 40-9 defeat to the Chiefs as the biggest loss of the season. Wide receivers dropped passes throughout that contest. Gruden pulled Carr out of the game late in the third quarter.

This will be the second outing on a two-game east-coast road trip following a visit to Atlanta. On top of the distance away from home, this will probably count as the Raiders’ first cold-weather contest. Decembers in the New York-New Jersey area can be a bit frosty. Carr has taken heavy criticism for his poor play in low temperatures:

Gruden and general manager Mike Mayock upgraded the wide receiver position, selecting Henry Ruggs III and Bryan Edwards in the first and third rounds of the draft, respectively. They should be able to put more pressure on the Jets’ secondary, which isn’t quite solidified with uncertainties at cornerback on the boundary.

Despite the travel, the Silver and Black have the offensive firepower to put forth a more competitive effort for this trip to New Jersey.

Like last year, the Raiders schedule finishes the season in Denver for another matchup in which the opponent and weather will be the topic of discussion.

In the 2019 season finale, the Silver and Black and Denver battled in a low-scoring contest, though the Broncos took the lead in the second quarter and held on for a 16-15 victory.

On the flip side, Denver added dual-threat running back Melvin Gordon III along with rookie wideouts Jerry Jeudy and KJ Hamler.

Between Ruggs, Jeudy and Hamler, we’ll see a lot of speed and yards after the catch in this contest. Also, look for Josh Jacobs’ increased involvement in the short passing game to test the Broncos linebackers.

In 2019, both clubs missed the playoff cut with identical 7-9 records. This matchup could be a play-in game for the postseason.

Typically, the Raiders have a daunting schedule on paper. During the last term, fans had a reason to gripe about the opponent setup. The club didn’t play a single home game in October, traveling between Weeks 3 and 8, which included a trip to London for a contest against the Chicago Bears. This team also had four back-to-back away games.

According to ESPN Stats & Info, the Raiders schedule affords the more road games at 1 p.m. ET than any other Pacific-Time-Zone team during a regular season:

In those six games, four of the opponents missed the 2019-20 playoffs (Panthers, Cleveland Browns, Falcons and Jets). The New England Patriots could take a step back without Brady. The Chiefs are the best of those opponents.

The Raiders schedule also puts several more factors that work in their favor:

Furthermore, three of the Raiders’ last four outings are home games. They only have two sets of consecutive away games.

Carr goes into Year 3 in an offense with a variety of new weapons, Ruggs’ speed and reliable hands, Edwards’ physicality and size, Bowden’s versatility and Witten’s potential as a red-zone threat.

Defensively, Guenther has a solid pair of linebackers in Littleton and Kwiatkoski, a ball-hawking safety in Randall, who has 14 interceptions for his career, and Damon Arnette, whom the team picked in the first round. Abram’s return should also help a pass defense that ranked 25th last season.

The Raiders have upgraded on both sides of the ball. With a Raiders schedule that’s not as challenging on paper compared to last year, nine wins seem like a fair expectation for this club.