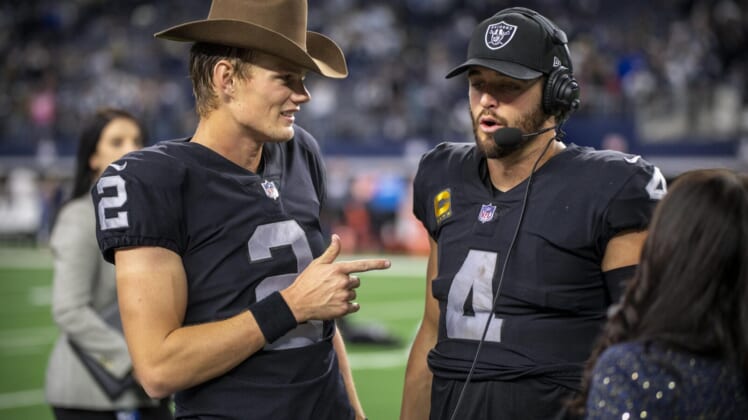 With the Las Vegas Raiders at 6-5 and entering the 13th week of the NFL season, that means only one-third of the season remains.

Along with the Raiders, the Los Angeles Chargers and the Denver Broncos are 6-5 and all three teams are one game back of the Kansas City Chiefs, who are 7-4.

Looking at the AFC Playoff picture, the Raiders are just on the outside looking in, sitting at the No. 8 position, with seven teams making the playoffs in the league’s new postseason bracket this winter.

Interim head coach Rich Bisaccia said the team has to keep in mind of where they are at, with aspirations to make the playoffs for the first time in five years. 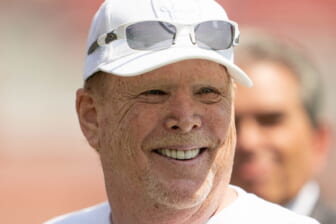 The Chargers, who currently hold the No. 7 spot, own the head-to-head tiebreaker over the Raiders as the Bolts are the only 6-5 team in the AFC to be in playoff picture entering this week.

Cincinnati, who defeated the Raiders two weeks ago, in addition to Buffalo have the other two wild card spots as both are 7-4.

Tennessee, New England, Baltimore and Kansas City, who are the AFC division leaders are seeds one through four atop the standings.

All six of the remaining teams the Silver and Black faces either currently hold a playoff spot or are still in the hunt.

In the Raiders’ final six games, three are against divisional opponents. Furthermore, after this week’s game against Washington, the final five matchups will be against AFC opponents, which could determine playoff tiebreakers and seeding come January.

Las Vegas takes on Kansas City on Dec. 12 at Arrowhead Stadium. After losing 41-14 two weeks ago at home, the Raiders will look to get revenge and win their second consecutive game in Kansas City.

In three weeks when Las Vegas faces Cleveland, it will be the second year in a row the team heads to FirstEnergy Stadium. It is the second time – and first since the 1971 and 1973 seasons – where the Raiders play in Cleveland on back-to-back occasions in the series.

The Raiders host the Broncos the day after Christmas as the Silver and Black will go after their fourth straight win against Denver inside Allegiant Stadium.

To start the new year, the Raiders play their eighth and final road game of the season against the Colts on Jan. 2, 2022. These two teams will face each other for the third consecutive year, with Indianapolis taking the victories in 2018 and 2020.

The regular season concludes on Jan. 9 against the Chargers in the first full season with fans at Allegiant Stadium. The Raiders will look avenge its early season loss in Los Angeles.

Disclaimer: All our predictions are based on the Raiders keeping and starting these players: