The Las Vegas Raiders will take the field Thursday night in the Pro Football Hall of Fame Game, the first NFL preseason game this year. While most of the big names won’t even suit up, there are still plenty of players worth watching on Thursday night.

Las Vegas will take the field against the Jacksonville Jaguars at 8 PM ET, effectively kicking off the 2022 season. With many Raiders fans in attendance to see legendary wide receive Cliff Branch elected into the Pro Football Hall of Fame this weekend, tonight’s game will also provide an opportunity to watch young talent make an early mark on the football world.

This isn’t a game for the starters. The likes of Derek Carr, Davante Adams, Maxx Crosby and Darren Waller won’t see the field against the Jaguars. However, that means there is an opportunity for players fighting to prove themselves with roster cutdowns looming in the weeks ahead.

Keeping that in mind, let’s examine five Las Vegas Raiders players to monitor during the Hall of Fame Game.

Las Vegas needs someone to step up on the defensive interior. An edge-rushing duo of Crosby and Chandler Jones can wreak havoc, but some of it goes to waste if the Raiders can’t create interior pressure. That’s why Neil Farrell Jr, a fourth-round pick in the 2022 NFL Draft, could prove crucial. 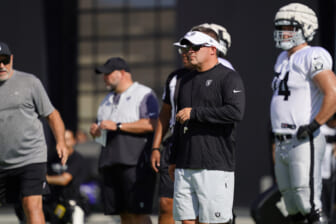 Farrell racked up 24 pressures this past season at LSU, per Pro Football Focus. While he isn’t expected to be a starter this season, Thursday night is his first chance to really prove himself in an intense atmosphere.

Regarded as a high-end run defender in college, how Farrell Jr. fares against the pass in the NFL will be even more telling. Keep in mind, he’ll be playing in a division with Russell Wilson, Patrick Mahomes and Justin Herbert. With a strong performance, the rookie could make his case for a rotational role this year.

Moe Moton went in-depth on how the retirement of Denzelle Good impacts the Raiders’ plans along the offensive line. Alex Leatherwood might have seemed like the favorite to step in at right guard immediately, with Brandon Parker at right tackle. However, Lester Cotton Sr. is really making a name for himself this summer and could steal Leatherwood’s job.

Undrafted out of Alabama in 2019, the 6-foot-4 guard has worked his way up the ladder since signing with Las Vegas. Signed to a reserve/futures contract in January, most viewed him as a longshot to make the 53-man roster months ago. Suddenly, everything is changing. Thanks to Cotton’s work and tremendous instruction from offensive line coach Carmen Bricillo, there’s a realistic chance a 2021 first-round pick loses his job to a 2019 undrafted free agent.

Of course, Cotton must still earn the job. He’s received plenty of reps in training camp and is one of the true standouts on the roster thus far during the summer. If he can maintain that momentum and carry it into games, Cotton’s chances of going from unknown to starter will skyrocket.

After losing Micah Kiser to a season-ending injury, additional practice reps opened up for Darien Butler. A standout defender in four seasons at Arizona State, Butler never heard his name called during the 2022 NFL Draft. Fast forward to August and he is one of the young players quickly making a name for himself in Las Vegas.

There is no path to a starting job, but that doesn’t need to be Butler’s path to earning a roster spot. The athleticism and range he showed at college immediately make him a candidate to be a core part of the Raiders special teams. Considering how important that facet of the game is to Josh McDaniels and general manager Dave Ziegler, that’s the first path to relevancy for Butler.

On Thursday, there is an even better opportunity for Butler. He’ll see the field at inside linebacker, asked by defensive coordinator Patrick Graham to use those instincts and athleticism in coverage. If he proves himself, that will lead to more reps in practice and even more meaningful snaps in the upcoming preseason games. A strong performance in the Hall of Fame game could be the next step towards Butler becoming the backup inside linebacker and a rotational defender in 2022.

We’re certainly not expecting Josh McDaniels to reveal anything significant with his offense on Thursday night or during the entire preseason. However, he will certainly feel a lot more comfortable about evaluating the young talent on the roster when there is a starting quarterback out there who is familiar with his system.

For as many snaps as he plays, Stidham should be an important player on Thursday night. He’s an experienced quarterback, someone the New England Patriots coaching staff once believed could be a viable starter. It means he can execute what’s asked of him without making repeated mistakes. All of that translates to the young skill talent on this offense being put in the best possible position to make names for themselves against the Jaguars.

As mentioned above, the Las Vegas Raiders won’t be putting their most important players on the field Thursday night. Because of that approach, Josh Jacobs and Kenyan Drake will watch from the sideline as Zamir White gets his moment to shine.

Highlighted by Vic Tafur of The Athletic as one of the most impressive Raiders players during training camp, this is an important moment. McDaniels is very comfortable using a committee approach at running back, which means White can play a significant role this fall.

Assuming White is cleared to play after returning to practice following an undisclosed injury, he should get plenty of touches vs Jacksonville. It means the athleticism that enabled him to run a 4.4 40-yard dash and post an incredible 10-foot-8 broad jump can be put on full display. Facing backups and fringe NFL players, White could shine and even start building the case to become a key fixture in the offense later this year.