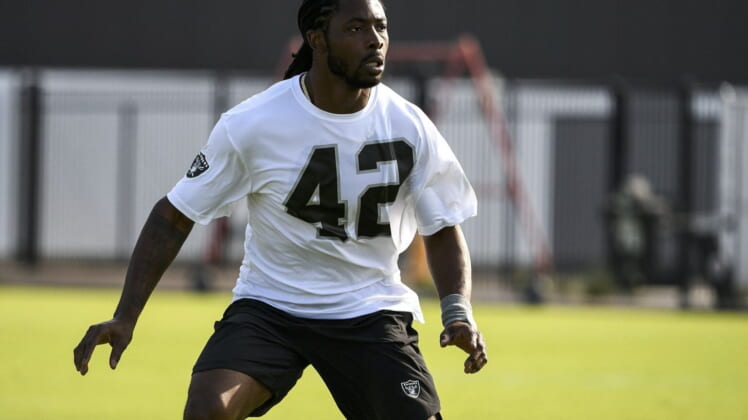 The massive hole in the Las Vegas Raiders defense is no more as GM Mike Mayock and coach Jon Gruden have remade the linebacking corps and it might just be the move that pushes the team’s defense to be respectable in 2020.

Just two years ago, the then-Oakland Raiders defense gave up 467 points—the most in franchise history. Now in Las Vegas, the wide receiver corps isn’t the only position group that breeds optimism. The Silver and Black not only overhauled its linebacker unit but modernized the group’s collective skill set.

Over the past several seasons, the Raiders have struggled to match up against tight ends and running backs in coverage. In 2019, they allowed 16 of their 33 passing touchdowns to players at those two positions. Through two games, Kansas City Chiefs tight end Travis Kelce racked up 197 receiving yards and a touchdown.

Now, the defense has an answer for guys such as Kelce, Melvin Gordon, Hunter Henry and Austin Ekeler within the AFC West. The Raiders had to shift from the old-school two-down thumpers who struggle in space and embrace hybrid-type defenders and players comfortable in coverage.

Since 2018, Cory Littleton leads all linebackers with 22 pass breakups. He also brings a quiet but confident attitude to the defense.

“He would never arrogantly voice it, he will never say it, but deep down, in Cory’s mind, he’s like, ‘I don’t give a (darn) who you are, I’m gonna cover your (butt). I don’t care if you’re (Travis) Kelce in Kansas City or if you’re George Kittle with the 49ers or Alvin Kamara,” Barry said. “I don’t care who you are. If I have to go out and cover you, man to man, I’m going to be able to do it.”

Littleton isn’t a violent tackler by any means. However, he’s not going to allow a five-yard play go for 15 yards because of a poor pursuit angle or lazy technique. With that aspect of his skill set, the Pro Bowl linebacker can become an asset to the pass rush on a delayed or disguised blitz.

Defensive coordinator Paul Guenther could move Littleton around the formation and allow him to use his speed and technique to blow up plays in the opposing team’s backfield.

The Raiders defense had a revolving door at the middle linebacker spot. Since 2015, we saw Curtis Lofton, Perry Riley Jr., NaVorro Bowman, Marquel Lee and Vontaze Burfict all have a one-year turn at the position. As a likely result of the instability, we saw a lot of communication issues between the second and third levels of the defense.

During a media presser, Nick Kwiatkoski mentioned the importance of communication multiple times. The Raiders inked him to a three-year deal. He’ll pick up green-dot duties, which leaves him responsible for lining up the defense and playing pre-snap chess with opposing quarterbacks.

Although Kwiatkoski served as a backup to Danny Trevathan and Roquan Smith during the previous term, he told reporters that he’s played with the radio headset “on and off.” The 6’2″, 242-pound linebacker started 22 games through five seasons for the Chicago Bears and had his opportunities to set their defense.

“He came out of college as a solid run defender who overcame a lack of great physical tools by usually being in the right place in coverage, and that’s exactly what he did this season for the Bears,” Palazzolo wrote.

Aside from Littleton and Kwiatkoski atop the depth chart, the Raiders added two players who bring collegiate safety experience to the position, which also bodes well for the unit’s ability to cover the middle of the field.

Rookie third-rounder Tanner Muse will likely make most of his initial impact on special teams, but don’t sleep on his versatility. Clemson head coach Dabo Swinney compared him to a top-10 pick from April’s draft, per The Athletic’s Tashan Reed.

“Tanner Muse is a poor man’s version of Isaiah Simmons,” Swinney said. “And what I mean by that is he’s not 6-foot-4, but he’s very similar to Isaiah in that he can do a lot of things. In a day and age where everybody’s looking for a hybrid guy, he is the ultimate hybrid guy. He was a great safety for us but has the confidence to play linebacker and has elite speed.”

Swinney isn’t just pumping up one of his players. Pro Football Focus took a deep dive on Muse’s 2018 coverage numbers:

The Raiders released Lee with a failed physical, so Muse could see a fair number of snaps in a backup role. Coming off his senior term with four interceptions and three pass breakups, he’s a potential surprise contributor who can take the field for specific matchups against tight ends in the nickel package.

Sometimes Gruden builds up players who make little to no impact during the regular season, though White’s skill set is on-brand with the Raiders’ clear mission to modernize their linebacker unit.

“Javin is the hybrid of all hybrids,” Tim Skipper said.”He has that ability. He is very, very intelligent and he knows his football. He’ll learn the scheme and once he learns the speed of the game, he’ll be good to go. He’s a guy that loves football and he’s extremely confident. He’s a freak athlete.”

In a phone interview with reporters, White went in-depth about how he can help the Raiders’ linebacker corps (h/t Jerry McDonald of the Bay Area News Group).

“I think I’m a nightmare for offensive coordinators, to be honest with you,” White said. “I’m a run-stuffer. I can cover tight ends, I can cover running backs. I can do anything. You can’t pick a matchup you really want to see when I’m in the box.”

White lined up all over the field at UNLV—safety, linebacker and even for a pinch at cornerback. With the increased usage of the nickel package, he could become an asset in particular matchups against offenses designed to spread defenses out and pick apart weak areas in coverage.

The two-down linebacker doesn’t cut it in today’s league with offenses attacking defenses between the hashes.

The Raiders desperately needed to add second-level defenders who can stay on the field for all three downs. All four notable additions at the position check that box. If Nicholas Morrow makes the cut and shows improvement, Guenther would have decent depth behind Littleton and Kwiatkoski.

Regardless, on paper, the Raiders’ current linebacker group brings more speed, coverage ability and versatility than any other unit in recent seasons. That alone should help pull the defense up from the bottom half of the league in yards and points allowed.

A flexible core of linebackers can supplement the run, the pass rush and neutralize mismatches on passing downs—therein lies one of the keys to a respectable defense.