Las Vegas Raiders: Can Raider Nation fans be happy even if the team does win? 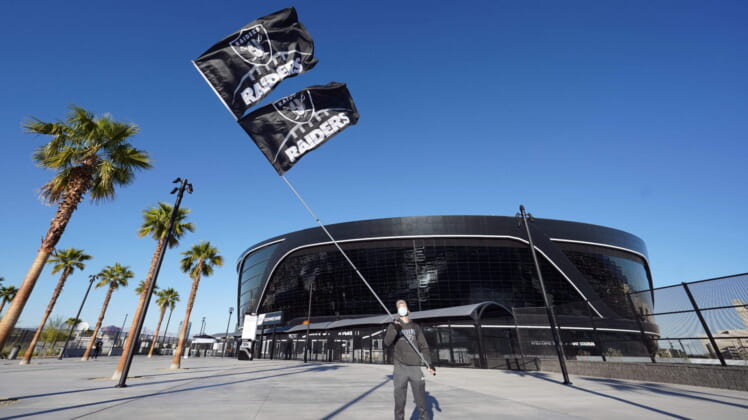 One thing I know for certain: Raider Nation is the best fan base in sports.

When it comes to loyalty, passion, love for the ethos that is the Las Vegas Raiders, those crazy, loving, insane fans that call themselves Raider Nation are second to none.

I’m not sure I know the answer.

Let me explain the full thought here: the Las Vegas Raiders fanbase remains divided over a couple of key – and deeply seated – beliefs about the team, its coach, and its quarterback. While there’s no question Raider Nation loves its team and all that it stands for, many might consider winning now as a double-edged sword.

The annual offseason fixation with Derek Carr as the Las Vegas Raiders starting quarterback will soon wind down (or will it?) as the NFL dead period ends and we roll into training camp in Henderson 11 days from today. Still, the Carr supporters and detractors show no sign of a peace accord. It’s as hopeless as the Wyatt Earp-Billy Clanton feud. Neither side ever thinks they’re wrong – even with data and statistics that show good points by both sides. The Carr debate rages on and I’m not sure even a Super Bowl victory would stop it.

And that’s the crux of my point. If the Las Vegas Raiders win and win in the playoffs, can all of Raider Nation be happy?

You may scoff and say, “of course, winning cures everything.” And while that statement usually rings true, what I hear and see from Raider Nation daily has me unconvinced that even winning would solve the debate or dislike for Carr, the Las Vegas Raiders all-time touchdown passing leader with 170 over the course of his seven-year career.

The overwhelmingly positive reaction to the return of head coach Jon Gruden four seasons ago seemed to unite Raider Nation momentarily. The excitement and the connection to the last time the team was truly relevant had fans in a jovial mood. The return of “Chucky” brought with it memories of the early part of the century and the swagger and bravado that helped build the legend of the Silver and Black.

Now, four seasons later, the Raiders have barely sniffed the playoffs and some fans have jumped off the Gruden bandwagon. Whether that’s fair or not is for another column, but there is growing disapproval of the way Gruden has coached the team and his decisions as a player personnel decision maker.

Gruden is 19-29 in his second stint at the helm of the Raiders and has missed the playoffs all three seasons with the club. Despite that and a 10-year contract, Gruden doesn’t seem to be going anywhere for a while. He’s got a rebuilt defense under defensive coordinator Gus Bradley, more talent on defense, a continuously upgraded offense, and the team’s new home in Las Vegas. Gruden might face more pressure from fans to win in 2021 than from owner Mark Davis, but there’s no denying some in Raider Nation have lost a little love for Chucky.

A new generation who can only live in the past

Since I began covering the Raiders in 2017, I’ve always believed many of the younger fans in Raider Nation have it worse than anyone. They know the storied history of the franchise – Al Davis, John Madden, Fred Biletnikoff, Willie Brown, Cliff Branch, et al. – yet they’ve never tasted victory like their counterparts 20-40 years older than them. They have never known the “Commitment to Excellence” that Al Davis brought the franchise from the 1960s through the early 2000s. It’s all just NFL Flims, YouTube videos, books and lore handed down from graybeards like myself.

As a UNLV alumnus, I understand this. Believe me, more than you know.

Yet this younger generation of fans seems to be happy being unhappy. If there wasn’t something to complain about daily on Raiders’ Twitter, what would life be like? For some, it seems the only happy state is one where gripes and complaints rule the day.

At the same time, I’d defend some of those fans because, after all, it is about winning. The Raiders have not won consistently for a long time. Some loyal fans are tired of that.

Las Vegas Raiders fans have much to be excited about – especially the state of this franchise in its new home of Las Vegas. The revenue, stadium, facilities, and excitement around the team are higher than it’s been in decades – and that’s without winning yet.

Then again, will winning be enough?

If Derek Carr leads the Las Vegas Raiders into Los Angeles this coming February and wins the Super Bowl, would those who don’t believe in Carr be believers? Or would they be happy on one side their beloved Raiders won the big game but did it on the arm of a QB they despise?

Therein lies the crux of my argument. I am not sure some would be happy enough to overlook the player they simply don’t like. I do think Gruden would erase his detractors with a nice run in 2021. For Carr, I don’t believe even winning a championship would erase the disdain. That’s beyond odd and I’ll never fully understand the emotion behind it.

I really would like to think winning would bring together the “stans” and the “haters.” For 2021, the Las Vegas Raiders are under pressure to win. They must do it for their longtime fans, they must do it to gain a grasp on their new local market after missing the opportunity to do it due to COVID-19 in 2020. The Vegas Golden Knights still own the market despite NFL fandom dwarfing that of the NHL.

As of today, I am just not sure winning would win over those who despise parts of this team but love the overall Raiders. Some would argue you can love part of your team and not other parts. You’re either all in or you’re not.

That’s not a certainty and telling fans how they’re allowed to be fans isn’t something I believe in.

This brings me back to my question at the beginning: would winning now – with Derek Carr and Jon Gruden – make all Raiders fans happy?