While it seems like a bit of a stretch, Las Vegas Raiders franchise quarterback Derek Carr thinks NFL fans and pundits don’t have enough respect for the potential the team has in 2022.

The AFC is an absolutely stacked conference heading into the new NFL season. Several teams that had strong 2021 campaigns or were serious contenders made notable additions in the spring. However, no division saw a greater arms race than the AFC West.

The division is expected to be the toughest in the league. After the Denver Broncos added Seattle Seahawks legend Russell Wilson. The Los Angeles Chargers gave their defense a major boost by acquiring JC Jackson and Khalil Mack, and the Raiders added one of the best wideouts in the sport by trading for Davante Adams. Not to mention, the division still includes Andy Reid, Patrick Mahomes, and the perennial contender Kansas City Chiefs.

The road to the AFC West title will be a long and hard-fought war, however, the Raiders are a live underdog choice to win the division. Since the team won 10 games last season and added star EDGE rusher, Chandler Jones, in the offseason as well.

However, it seems that Derek Carr thinks that the Las Vegas Raiders are not getting talked about enough, and is “frustrated” by the lack of respect his squad has gotten as they and other organizations open training camp this week.

On sports books site FanDuel, the Las Vegas Raiders are a +700 to win the AFC West this season. That is the fourth lowest odds in the division. 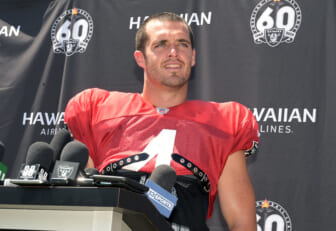