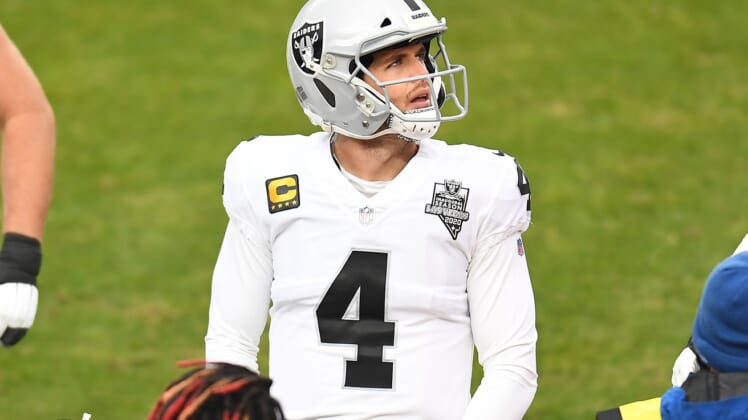 Derek Carr has proven himself, but continually lands in NFL trade rumors each year. While Jon Gruden might be fond of the quarterback carousel, it seems the Las Vegas Raiders won’t be making a change in 2021.

Just a year ago, the Raiders were heavily discussed as a potential landing spot for Tom Brady. There’s also chatter around every NFL Draft that Gruden and Mike Mayock could trade up for a quarterback. Coming off one of the best seasons in his career, offseason speculation hinted Carr could be on the move in 2021.

While plenty of NFL teams would love for that to happen, it seems efforts to engage the Raiders in trade talks won’t go anywhere for rival general managers.

According to IndyStar’s Jim Ayello, the Indianapolis Colts made several calls around the league before acquiring Carson Wentz. One of the teams they reached out to was the Raiders, who made it clear to general manager Chris Ballard that Carr is not available for trade.

Rumors surrounding Carr are an annual tradition, but NFL teams might be responsible for creating them this offseason. The first reports came out in early February when it was disclosed that the 29-year-old quarterback was a hot commodity. Before long, though, the Raiders made their stance on Carr quite known.

Jay Gruden, the former NFL head coach and Jon’s brother, indicated that he would be surprised by a trade. Teams kept making offers to Las Vegas, but the organization leaked out that it intended to keep Carr for the 2021 season.

There isn’t a lot of incentive for the Raiders to trade him this year. He is coming off a strong season, completing 67.4% of his passes, throwing for 4,103 yards and posting a career-high 101.4 passer rating and an impressive 27/9 TD-INT ratio. While the team finished with an 8-8 record, that was largely a reflection of injuries and an awful defense.

He is under contract for a $22.125 million cap hit in 2021, a bargain compared to quarterback salaries across the league. The deal gets even better next year, the final year of his contract, owed just $19.87 million in 2022.

Only one scenario might change things. If the Houston Texans finally cave by trading Deshaun Watson, Las Vegas will immediately want to get involved. Gruden could flip Carr for a 2021 first-round pick and Day 2 selections in 2022, which could then be traded to the Texans for Watson. Given Houston is holding its ground, that outcome seems unlikely.

As a result, teams hoping to land Derek Carr will need to look elsewhere. Fortunately, Las Vegas does have a fallback option for them. Marcus Mariota is generating trade interest from multiple clubs and it would be a surprise if he isn’t moved before the NFL Draft.