The Las Vegas Raiders and Pro Bowl tight end Darren Waller are reportedly closing in on a long-term contract extension that could be done before the team takes the field versus the Los Angeles Chargers Sunday afternoon.

Waller’s contract situation has been one of the key storylines during the team’s 2022 training camp. For the most part, he has stayed away from the organization this summer with the assumption that he is unhappy with being well underpaid for the production level he has brought to the team during his four-year run in Silver-and-Black. That dissatisfaction even led the 29-year-old to fire his previous agent and seek out new representation in the hopes of getting a deal done before the start of the 2022 season.

Well, it seems like that may have been the right move because Waller’s reps and the Raiders are nearing an agreement on a new long-term deal. On Thursday, Pro Football Talk reported, “Per a league source with knowledge of the situation, talks between the Raiders and Waller are progressing. The goal remains to get a deal done by Sunday.”

What has likely helped negotiations progress is the fact that Waller has made it clear he had no intentions of missing games this season to force the Raiders to make a deal sooner.

Waller is set to make $6.25 million this season and in 2023. That is a far cry from what other top tight ends in the NFL are currently making. On Wednesday, the Buffalo Bills gave Dawson Knox a new four-year deal that will pay him over $13 million on average each season. While certainly a player on the rise, Knox has put up nowhere near the numbers of Waller when healthy.

A couple of weeks ago, it was reported that the Raiders could very well give the 2020 Pro Bowler a contract that makes him the highest-paid player at his position. Currently, San Francisco 49ers star tight end George Kittle is the top earner at the position. Making $15 million per season. The report from August suggested Waller may end up getting a deal that brings him to $16 million annually. 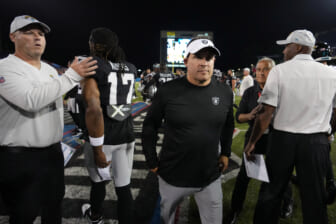 Considering his age, and the lifespan of most NFL contracts, a four-year contract worth as much as $65 million and with $34 million guaranteed could be the range of numbers the Raiders and Waller agree on.