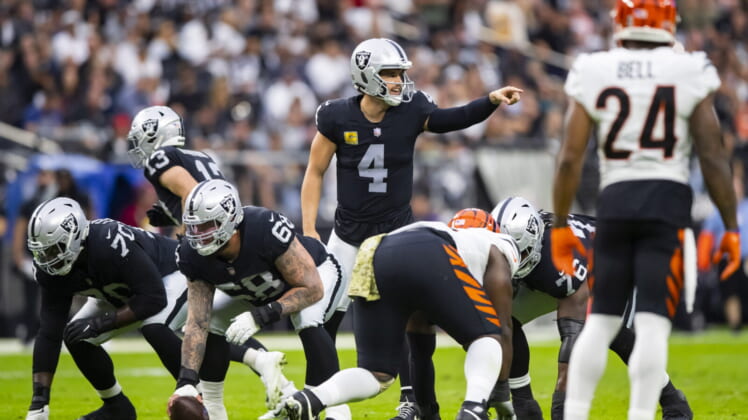 The Las Vegas Raiders are preparing to take on the Dallas Cowboys at AT&T Stadium on Thursday at 1:30 p.m. PST.

This is the Silver and Black’s eighth Thanksgiving game in franchise history and first since 2013.

“My whole mom’s side of the family was Cowboys fans, my middle name is Dallas because of that,” Carr said. “We grew up and my papa would preach, and we’d go to his house. We wouldn’t eat at the table. We’d eat with tv trays watching the Cowbys play.”

Here are four keys to watch tomorrow between the Cowboys and Raiders.

One of the keys to the unsuccessful offense has been due to a low third down conversion rate.

Since the Raiders’ first loss against the Los Angeles Chargers four weeks into the season, Las Vegas has faced 75 third down opportunities.

However, Carr and the offense has only converted on 22 of those 75 third-down opportunities for just a 29.3% rate, including one in each of their last two games in 16 total chances.

Overall, on the season, the Raiders rank ninth worst with a 35.6% third down completion rate. 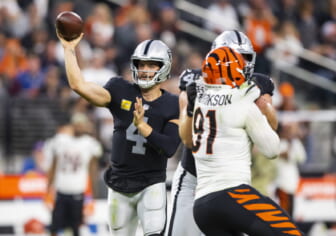 “Third downs have been our Achilles’ heel,” offensive coordinator Greg Olson said. “When you’re not staying on the field – which has been the issue – we’ve stayed on schedule when we like to be in third-and-manageable situations. The past two weeks, we’ve had third-and-three or less and have jumped offsides or not gotten the first down.

“That stalls drives out, puts the defense back on the field, so third down was the big emphasis last week. It will be again this week.”

Among the third down and distance completion rates this season, the Raiders have a 61.5% completion percentage from one to three yards, 47.1% from four to six yards and 27.7% from seven to ten-plus yards

One of the problems the Raiders have faced over the last few weeks have been the penalties, especially at crucial times in the game.

Whether it is false start, offsides or holding – on offense, defense or special teams – penalties have the chance to not only change a drive, but also the game.

“It’s the penalties – self-inflicted wounds,” defensive coordinator Gus Bradley said. “We’ve got to play with more discipline. It’s an aggressive game and we talked a lot of about getting off and getting that rush going. We’ve got to make good decisions on some of those opportunities.

“We had a sack taken away in one opportunity and we were off the field on a third down, could have had real good field position for our offense after a punt. We just have to be more disciplined in those situations.”

This year, the Silver and Black have seen 75 flags go up in the air for 675 costly yards. Raiders’ opponents have committed 52 penalties for 521 yards.

On Thursday, the Cowboys offense will be down at least one of its wide receivers.

Amari Cooper, who was drafted fourth overall by the Raiders in the 2015 NFL draft, will miss this game after testing positive last week prior to their game against Kansas City.

Furthermore, wide receiver CeeDee Lamb is currently in the concussion protocol and did not practice on Tuesday.

As a result, the Cowboys will look for Michael Gallup and Cedric Wilson to be the Cowboys’ top two pass catchers if Lamb is unable to go.

However, if Lamb does start, him and Gallup will be the primary receivers for quarterback Dak Prescott.

Despite Cooper out and Lamb uncertain to play, the Cowboys can still produce offensively with running backs Ezekiel Elliot and Tony Pollard along with tight ends Blake Jarwin and Dalton Schultz.

Elliot, who is the primary back, ranks seventh in the NFL with 695 yards.

Bradley said the defense will ultimately have to watch both phases of the Cowboys offense.

“Overall, the breakdown we have, they’re a heavier run team and you wouldn’t think so but they’re a very committed run team and we’ve got to play at both assets,” Bradley said. “This game is going to be a great challenge because they’re so balanced.

“They get explosive plays. I think they have 30 explosive runs on the year and that’s not including the passes. Something like 60 explosive passes, so we’re going to have to be on it both in the run game and the pass game.”

4. Be prepared for strong Cowboys defense

Carr and the offense will have to watch precisely where the defense will be. Dallas, who ranks tied for second with Buffalo with 15 interceptions on the season is led by defensive end and linebacker Micah Parsons and cornerback Trevon Diggs.

Diggs leads all NFL defenders with eight interceptions this seasons and is only one of two players with two interceptions returned for a touchdown.

Parsons ranks ninth in the NFL with eight sacks.

“A tremendous player, an unbelievable athlete, a great rusher, he creates a mismatch problem for backs across the league when he lines up in the linebacker position and he’s got great speed off the edge,” Olson said of Parsons. “So, he possesses a great challenge for our tackles coming off the edge. “So, got to be really aware of where he’s at and what your matchup is against him.”

The Raiders and Cowboys kick off Thursday afternoon on CBS in the middle game of the Thanksgiving NFL slate.