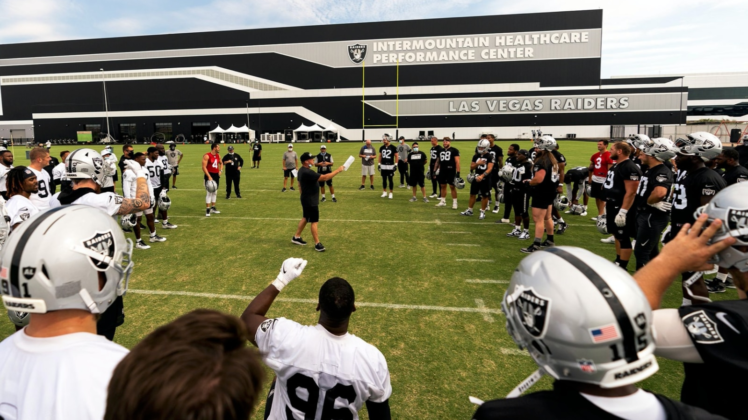 The Vegas Raiders will, once again, train at their facility in Henderson, NV., in 20201. Photo: Las Vegas Raiders

The Las Vegas Raiders returned to practice on Sunday and star running back Josh Jacobs was back on the field. Linebacker Cory Littleton and safety Jeff Heath both talked with the media about padded practice starting on Monday.

Apparently the load management for Las Vegas Raiders running back Josh Jacobs has ended – for now.

The second-year running back was back on the practice field on Sunday after missing the first three days. When asked about Jacobs’ status early in the week, coach Jon Gruden said they were scheduling the running back differently during camp. He also referenced Jacobs’ health and how it would be the key to his growth.

“He had a big year last year. He’s got to stay healthy,” Gruden said. “We need our feature back down the stretch. We were in a playoff stretch last year and didn’t have him. I think he’s got to stay wire-to-wire healthy and we have to get more out of him in the passing game, more on the field on third down. He had a great year last year and we expect more of him from this year.”

With Jacobs back the day before the Raiders get padded up, it appears he’s ready to get going.

Note: offensive tackle Trent Brown, who battled nagging injuries in 2019, did not return but is expected to Monday.

One of the Raiders key additions on defense during the 2020 offseason was the signing of former Dallas Cowboys safety Jeff Heath. Heath is expected to bring versatility, stability, and leadership to the team’s safety corps.

When asked about what makes for a dominate defense, based on his experience in Dallas, Heath said it really comes down to one key stat.

“I think the number one thing that we need to do as a defense is create turnovers,” Heath said. “ The best defenses and the best teams that make the playoffs every year, they always seem to be leading the league in takeaways. So, that’s going to be first and foremost.”

While the Raiders have improved dramatically on defense over the offseason, Heath said higher takeaways doesn’t necessarily mean you have a team of All-Pros.

“In Dallas, we had some great-effort defenses where it wasn’t mismatches, it wasn’t all first-round picks and pro bowl players,” Heath said. “We had a whole different number of guys who contributed. Everyone bought into the system of sprinting to the ball, getting there with bad intentions and when you do that, not only do you intimidate an offense, but you eliminate big plays, you cover up mistakes that might be made just because guys are running to the ball and you’re getting 11 hats to the ball every time. Those two things in particular, that’s really what we need to focus on.”

In 2019, the Raiders ranked 19th with a -2 takeaway differential. It’s clearly an area of focus for defensive coordinator Paul Guenther and his new defense.

Cory Littleton Ready to Pad Up

The biggest free-agent signing of the offseason for Las Vegas was former Los Angeles Rams linebacker Cory Littleton. Littleton said despite the pandemic taking away the regular offseason preparation and workouts, he and his teammates are itching to get out in pads and hit.

“At least with the preparation, it’s a part of what we do,” Cory Littleton said. “Playing with pads is a part of the game and it’s something we haven’t been able to do, especially with this type of offseason, which also goes into my transition here. Learning a new defense isn’t always easy, especially harder when you can’t get to practice it all the time, so being here right now this is exactly what we need, myself included. I think we are all doing a very good job right now.”

The Las Vegas valley is experiencing one of its worst heatwaves in nearly 80 years. With temperatures exceeding 111 degrees expected for the next 10 days, the new Intermountain Health Care Performance Center’s indoor facility will pay dividends right away.

The normal high is 102. Welcome to Las Vegas Raider Nation.