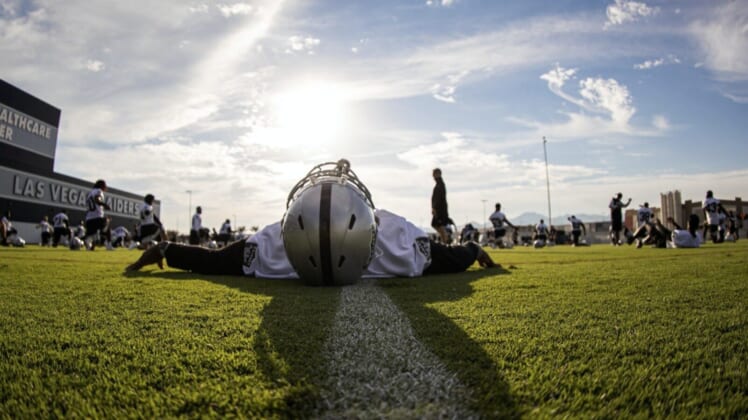 The Las Vegas Raiders were back at work on Thursday and the defense was the focus for the media as Paul Guenther, Clelin Ferrell, and Damarious Randall all chatted about the 2020 season.

Henderson, Nev. – Las Vegas Raiders defensive coordinator Paul Guenther was cool as a cucumber as he met with the media via Zoom from the team’s training facility on Thursday.

Guenther’s energetic and engaging press conference underscored the confidence the Raiders organization has in its defensive roster heading into the 2020 season. For years, the Raiders have struggled on defense making it more difficult for them to win games and set up their offense for more success. Guenther’s system, notoriously heady and complex by some standards, needs a certain type of player to execute it well.

“I look back to 2018, we opened up against the Rams on Monday Night Football, and not one of the starters is with us anymore from that starting lineup,” Guenther said. “So, we really rebuilt the engine here with some new, young talent. Very excited with where they’re at. They’re doing a hell of a job picking up the system, the scheme and techniques of everything we’re doing.”

The Raiders defense ranked 31st in 2018 and 24th in 2019 causing many Raiders fans to decry Guenther and his ability to field a defense worthy of the silver and black. Yet coaches can’t play on the field and it proved difficult for Guenther to run his scheme when he simply didn’t have the right men to do it.

“A lot of times the last couple years, guys, to be honest with you, you look down at your call sheet and say, ‘Well, I can’t put this guy in that situation,’ or ‘this guy in this situation,’” Guenther said. “But I think, with the young talent that we have, the speed that we have, the first thing that I noticed is that we’re much faster on defense. We got some good rushers, we got some good cover guys. That’s what you need in this league to be successful.”

The addition of linebackers Cory Littleton and Nick Kwiatkoski were big. Adding leadership, speed, and pass coverage skills, the Raiders and Guenther finally field a linebacker corps the coach trusts to run his scheme.

“As a linebacker nowadays in the NFL, they’re going to get you matched up with tight ends and running backs and those types of things,” Guenther said. “This guy (Littleton) can cover. He can cover ground in a very short amount of time. He’s picking up the run fits in our defense which are a little different, structurally, from where he came from. He’s done a really good job for us in everything that we’re doing, both base and solid defenses.”

Much like head coach Jon Gruden, Guenther also had praise for an addition in the middle of his defensive front. The talk of this camp has been defensive tackle Maliek Collins who joined defensive line coach Rod Marinelli from Dallas. Guenther gave Collins, who is on a one-year contract with the Raiders, high praise.

“Maliek, you know I’ve been around Geno Atkins a long time in his career, Maliek reminds me a lot of Geno Atkins,” Guenther said. “He might be our best acquisition in the offseason from what I have seen. He’s very fast, he got his weight down, he’s in great shape. He is the prototypical three-technique that we’re looking for in this defense.”

Clelin Ferrell says he doesn’t listen to the haters or detractors who call his rookie season disappointing.

“I never listen to what people had to say even though you know you hear it,” Ferrell said Thursday. “You definitely hear it, but for me, nobody knows what I know internally or what we know internally as a team. Something that always stuck with me was like regardless of haters or things like that. A hater is someone who doesn’t wake up every day and do what you do, but they can speak on something that you do every single day.

“So, regardless of the fact, I just block a lot of that stuff out. It doesn’t really matter. I know I had a good rookie year regardless of what anybody had to say about me. So, I’m just ready to improve on it and get to a Super Bowl this season so I’m excited.”

Damrious Randall, signed as a free agent safety this offseason, said Thursday his experience at both positions will benefit his young teammates when they get on the field.

“I just kind of understand whenever corners are in tough situations and I can kind of maybe give a pointer; kind of more help over the top in certain situations so the quarterback can kind of get off that read and to just to try to help place our defense as much as I can,” Randall said.