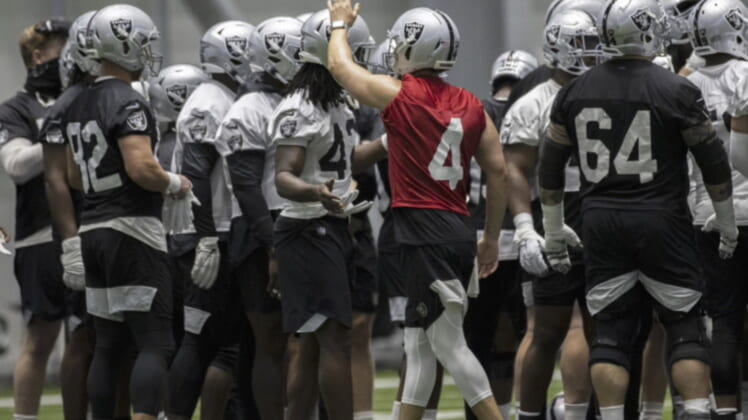 The Raiders hit the field on Friday and were more animated and intense as practice ramps up towards next week’s padded debut. The defense looked fast and the Raiders offensive line was sharp.

Henderson, Nev – Jon Gruden’s Friday Zoom session started a little later than usual as the Las Vegas Raiders coach kept his players on the field a little longer than usual. There were more 11-on-11 drills too with both the first-team offense and defense getting some more reps in the runup to full contact starting next week

“We haven’t even put a pad on yet, so I’m not going to get way ahead of myself after one full speed, shorts practice,” Gruden said when asked if he was pleased by what he saw from his revamped defense. “But we rebuilt the whole defense. There’s not one starter that was here in our first season. We knew we had a task, a big task, and we were going to draft young players and play young players…we have a long way to go and I respect that.”

Waller Celebrates 3 Years Sober and is Learning from Jason Witten

At one time, Raiders tight end Darren Waller walked a very dark path finding himself crippled in the grasp of addiction. But today, he celebrated three years sober and it’s something that instills a sense of pride in him.

“It means a lot to me. It means that I’m not the same person that I was,” Waller said. “Before, I wasn’t somebody that was worth looking up to or inspirational in any way. Now, I’m kind of free from that. I can really step into my calling and write my own story. Be of service to other people in the process and inspire people. Me being clean, I feel is me breaking generational curses in my family.”

Gruden also said Waller’s story is one more and more young people and those who struggle with addiction need to hear.

“You said it, he had a dark portion of his life there for a while that not a lot of people come back from,” Gruden said. “I hope a lot of young people out there get the real story behind Waller that you can beat addiction. If you just listen to Darren Waller on how he did it, he’s a great source of leadership and proof that you can be great even though you had some really dark times.”

Waller was also asked about the addition of veteran tight end Jason Witten. Waller said he’s already learning from the future Hall of Famer and his addition to the tight end room adds something special. He’s also learning to be a better tight end himself.

“One thing that’s impressive to me is I don’t think anybody gets off on snaps as quickly as he does. He’s usually the first one to five yards,” Waller said of Witten. “He’ll be quicker then receivers for the first five yards. I feel like that is something I need to improve on. Just being around him I’m like, ‘I want to get off the ball like him.’ He always has suggestions. He’s always asking questions about the offense and in return as he’s learned more, he’s helping us with what we see and things we can do different.”

Josh Jacobs Not a Participant Day 3

Although healthy and ready to go, running back Josh Jacobs did not participate in practice today in Henderson. Gruden said it’s nothing to worry about and Jacobs is just on another schedule set forth by the team.

When asked about what Jacobs needs to do in order to improve on his sensational rookie season, Gruden said one thing: stay on the field.

“He’s got to stay healthy. We need our feature back down the stretch,” Gruden said. “We were in a playoff stretch last year and didn’t have him. I think he’s got to stay wire-to-wire healthy and we have to get more out of him in the passing game, more on the field on third down. He had a great year last year and we expect more of him from this year.”

Arnette didn’t shy away from any Raiders receiver in coverage and did really, really well.

As practice started, we were alerted that second-year defense end Maxx Crosby had cleared his COVID quarantined and would return to practice on Friday. Crosby was asymptomatic and was a full participant today.