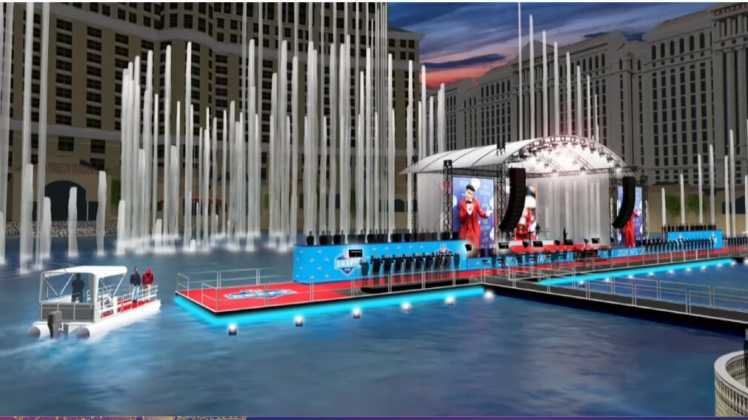 The Raiders and the NFL announced…at today’s Clark County Commission meeting in Las Vegas and it confirmed a massive stage over the Bellagio Fountains.

Today, the Las Vegas Raiders and the NFL announced in-depth plans for the 2020 NFL Draft which will be held in Sin City April 23-25 right in the heart of the famous Las Vegas Strip – including the red carpet stage (where picks are introduced) being set up over the magical Bellagio fountains.

The massive stage will include a ferry boat that will shuttle draft picks to the red carpet stage which they will cross. They’ll then be taken to the main stage area near Caesars Forum for selection.

The NFL also highlighted plans for fan and interactive areas which will be located near the Caesars Forum area behind the Westin off Linq and the Flamingo and will include a slew of road closures.

The Raiders also continue full-steam ahead on construction of their new $1.8 billion home in Allegiant Stadium. The NFL Draft will be another way for the team to showcase its new stadium in front of a national audience. While plans for activities at the stadium were not revealed, count on some activity for the team and league to show off the new stadium. Although recent news of a delay in raising the structure’s roof raised some concerns, the team remains steadfast it will not delay the July 31, 2020, substantial completion date. The first event (unknown at this time but thought to be a Raiders preseason game) will take place August 16, 2020.