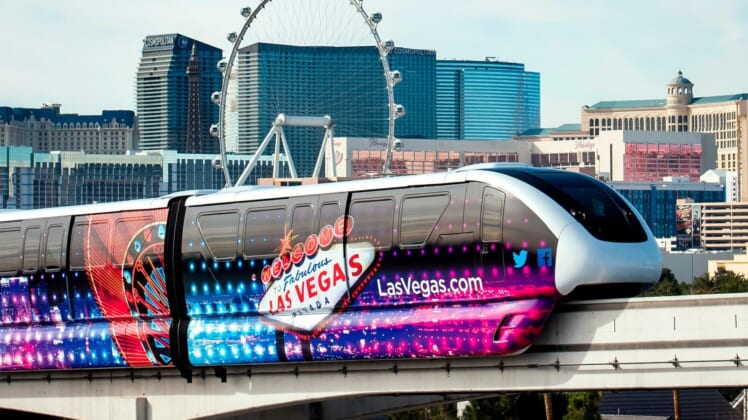 Report states local organizers see the city’s elevated mass transit as big part of transportation plans as The Strip gears up for a busy week in April.

For most Las Vegas residents, the raised Las Vegas Monorail that runs along Las Vegas Boulevard is nothing more than novelty used by conventioneers and tourists. But when the National Football League hosts the NFL Draft here in April, residents and partygoers alike may be utilizing the transit more than ever before.

According to a report by Mick Akers at the Las Vegas Review-Journal, local transportation officials and the NFL are looking to the Las Vegas Monorail as a key part of the week’s transportation plan. With portions of Las Vegas Boulevard and Flamingo Road closed or with restricted access for over three weeks, residents who work on The Strip and tourists are going to look for alternate ways to move around. For the three days of the draft itself, those two streets will be closed completely in areas adjacent to The Linq, Caesars Palace, Bellagio, and other key event areas.

That’s where the Las Vegas Monorail comes into play. Plans for it to be utilized extensively are part of the master event plan, according to Akers’ report.

“We are planning to be carrying a lot of locals and visitors during draft days to the site at Caesars Forum and will be operating the system similar to other citywide events with train frequency approximately every 4 minutes,” Ingrid Reisman, a monorail spokeswoman to the Review-Journal. “The system is expected to be highly utilized to bring fans and attendees to the NFL Draft Experience and move them out of the heavily congested area to access transportation connections (ride-hailing, cabs, parking, etc.) along our system route and outside of the road closure area and event ground zero.”

With two major monorail stations within walking distance of the NFL Draft location near the Linq, utilizing the train will make sense for many of the attendees staying throughout the resort corridor.

As draft plans continue to be solidified ahead of next month’s big event, the report says the Las Vegas Convention and Visitors Authority will release official recommendations on all parking and transportation for the event in conjunction with the league soon.

Although estimates range from between 300,000 and this 750,000 visitors, the latest developments with the hysteria surrounding the COVID-19 outbreak (coronavirus) could dampen attendance. Its impact on event attendance isn’t known yet but the NFL did recently release a statement they are monitoring the situation closely.