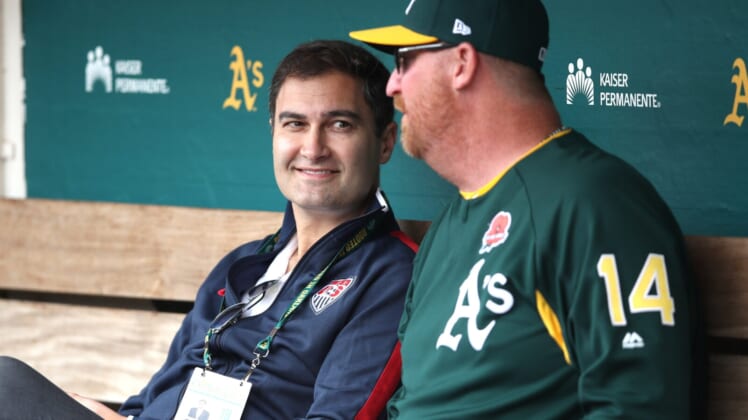 The Oakland Athletics flirtation with Las Vegas as a possible MLB relocation spot included the team’s president mentioning a $1 Billion price tag for a new stadium, should the team move to Southern Nevada.

The report from Mick Akers of the Las Vegas Review-Journal said the A’s told Clark County Nevada officials a new stadium in the valley would cost at least $1 Billion. Akers said A’s president Dave Kaval, who has been on a fact-finding mission in Las Vegas this week, told Clark County officials the team would want a stadium near the Las Vegas Strip with no location identified, according to Akers’ sources.

The source also told Akers the A’s are looking to fund the stadium via a public-private partnership, much like their former roommates in Oakland – the Raiders.

Although a specific site wasn’t discussed at the meeting, according to the report, several sources have told Vegas Sports Today a plot of land near Starr Avenue and Las Vegas Boulevard South, just south of St. Rose Parkway, is a possible target site. Near the border of suburban Henderson, it is close to the resort corridor and Interstate 15. To trigger an MLB relocation of the A’s to Las Vegas, a suitable location and funding would need to be secured.

The Athletics want public money for MLB Relocation to happen

The source also told Akers the A’s are looking to fund the stadium via a public-private partnership, much like their former roommates in Oakland – the Raiders. The Raiders received $750 Million in hotel tax money to build the nearly $2 Billion Allegiant Stadium.

Although the Raiders were able to garner the financial support of the local government, the report states they are not interested in a financing deal like the one that resulted in Las Vegas becoming the newest NFL market. To secure an MLB relocation agreement, funding a stadium would need to be the first step before approving a move.

The A’s are running out of options in Oakland as the dilapidated Oakland-Alameda Coliseum is no longer considered a viable long-term home for the team, according to a statement last week from Major League Baseball. The Oakland City Council is slated to vote on a stadium project in July at the cost of just over $12 Billion. The league, not hopeful Oakland will get a deal done, gave the team permission to talk to other markets including Las Vegas, Portland, and other markets. The last time MLB relocation occurred was in 2005 when the then-Montreal Expos moved to Washington, D.C. and became the current Washington Nationals.

While Las Vegas is eager to land another major league sports team after adding the Raiders, Vegas Golden Knights of the NHL, and the Las Vegas Aces of the WNBA, there’s little public appetite to foot the bill. MLB relocation might be something the area is interested in and could support, the cost of yet another stadium will be a tall task in the post-COVD era.

Las Vegas is certainly playing the game but there’s no indication the talks are leading to more substantive movement in looking to fund what would need to be a domed baseball stadium in Southern Nevada. Kaval has spent significant time in Las Vegas and the interest is certainly mutual. But without funding from a public entity, the chances of the team relocating to Las Vegas could be wishful thinking. Even if Oakland doesn’t pull the trigger on a new mixed-use development and stadium, the A’s could be stuck unless another possible landing spot is willing to put up the money to lure the team.

Although Kaval has denied a reported meeting in Portland next week, there is a push by the Northwest city to be a player. Despite civil unrest and other issues in the city, it’s considered the best competitor to Las Vegas should the A’s indeed leave Oakland.