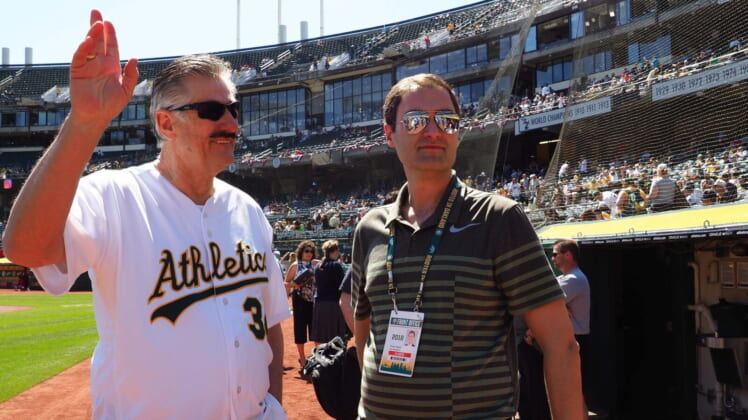 The Oakland A’s flirtation with Las Vegas as a possible MLB relocation site will reportedly continue next week as a report from the Las Vegas Review-Journal indicates. Las Vegas MLB relocation has been a hot topic as Oakland awaits a July 20 vote on a new waterfront stadium in their current location.

Mick Akers reported a source indicates Athletics president Dave Kaval will be in Las Vegas on June 21-22. The report indicates the focus is possible stadium sites. While Akers’ report didn’t indicate any specific locations, sources with Clark County have indicated in the past one possible location remains near the intersection at Starr Avenue and Las Vegas Boulevard in the southwest part of the valley. The location could be heavily dependent on which local government body – if any – could step up to help pay for what is being estimated as a $1 billion stadium project.

State of Nevada officials have indicated they are not willing to consider a public funding option like they did to build the Las Vegas Raiders Allegiant Stadium. That project and the team’s headquarters and training facility in Henderson and the expansion of the Las Vegas Convention Center were funded by an increase in the local hotel tax.

The A’s are awaiting a July 20 vote on a $12 billion mixed-use project, including constructing a new baseball stadium at Terminal Island on the bay waterfront. The A’s were given approval by MLB to explore other locations for a possible move should the project not be approved.

Las Vegas MLB relocation not close to being a reality – yet

Las Vegas MLB relocation hinges on funding of a stadium here too. With the State of Nevada unwilling – and most likely unable – to pitch in the wake of statewide budget shortfalls due to the pandemic shutdown, it could come down to another local entity stepping forward with some funding options. The City of Henderson and the City of Las Vegas both have publicly said they are interested in talking with Kaval about options. So far, details haven’t emerged as the search and possible Las Vegas MLB relocation remains in the early stages.

The report indicated that in addition to local politicians and representatives, Kaval will meet with leaders from the hospitality and tourism industry as well. All of this being done as Oakland reiterates its desire to stay in place in California working to pass the mixed use project in their current home.

Las Vegas MLB relocation is far from a given as many things must happen – in two different states – before it gets more serious.