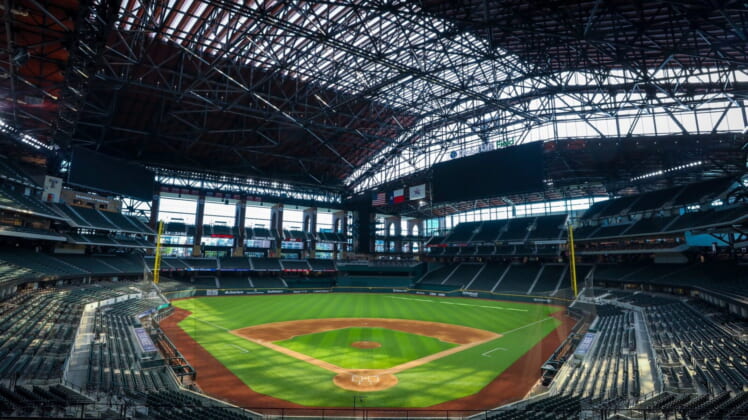 According to Oakland Athletics president Dave Kaval, the only location his team is exploring for a possible MLB relocation is Las Vegas.

The Raiders did it one way, and it included a trip to Carson City and something at the state level. We have no idea if that’s what our path would be or not.

In an exclusive interview with the Las Vegas Review-Journal, Kaval put to rest any rumors the team was visiting any other markets as a possible destination.

“I want to be very clear about this. There are no other trips planned,” Kaval told RJ writer Ron Kantowski. “The only location we’re actively making trips to is Las Vegas.”

Of course, you can read between the lines there. Not “actively” pursuing or having “planned” trips doesn’t mean other discussions aren’t happening. Portland, Oregon, is another reported possible landing spot for the Athletics who play in the worst stadium in MLB.

While MLB relocation isn’t common, the last time it happened was in 2005 when the then-Montreal Expos moved to Washington, DC, and become the Nationals, baseball is squarely in support of the A’s looking at other options – including Las Vegas. With MLB relocation almost a certainty in the case of the A’s, where they wind up is a bigger question vs. if they’ll move.

In the wide-ranging interview, the subject of a public-private partnership to fund a reported $1 billion new stadium near the Las Vegas Strip to trigger MLB relocation was also discussed. On Sunday, Nevada legislatures said considering public money to lure yet another major league sports franchise to the area wasn’t on the table.

Despite those public comments and the political air cover for Nevada’s politicians, Kaval expanded on what the A’s might be looking for when it comes to some sort of public contribution to a new stadium if MLB relocation were to be approved.

“I wouldn’t rule anything out at this stage, (but) I think what we’re more focused on is understanding who would be willing to partner on the public side — there are all these different folks who could come together to make something like this happen,” Kaval told Kantowski. “The Raiders did it one way, and it included a trip to Carson City and something at the state level. We have no idea if that’s what our path would be or not.”

The City of Henderson tried to lure the Arizona Diamondbacks with secret talks of building a stadium in the Las Vegas suburb. Henderson also gave a sweetheart deal to the Raiders to build their HQ in the city. They are widely considered to be the biggest player in any sort of publicly-funded stadium solution in Southern Nevada.

If the A’s where to secure MLB relocation approval and move to Las Vegas, what kind of stadium might they build in Henderson or elsewhere? Kaval’s personal tastes might over a glimpse to what a MLB experience in Las Vegas might be like.

That out-of-the-box ballpark experience might be just the thing for Las Vegas – if the A’s and Kaval can find the money to make it happen. To make MLB relocation happen for Las Vegas, more creativity than the Raiders required may be necessary.

With Las Vegas oppressive heat during the summer, a new stadium would have to be a retractable dome like the Texas Rangers just built in Arlington. The $1.1 billion Global Life Field was completed last year and is a good model for what the A’s might want to build in Las Vegas. It seats 40,300 and its retractable roof helps protect players and fans from the hot Texas summers.

If the A’s were to relocate to Las Vegas, could they play in the brand-new Las Vegas Ballpark – home to their AAA affiliate Las Vegas Aviators? They’d need a new home during stadium construction if MLB relocation were approved and Kaval didn’t rule it out.

“There are cases where teams have done something like that. Obviously, it’s smaller. I don’t think we have a specific answer to that yet,” Kaval told the RJ. “But it’s something that could be (an option) depending on the timeline of things. I wouldn’t rule it out. Las Vegas Ballpark is an incredible facility; it’s really the class of minor league ballparks. With the mixed use, the bars and restaurants around it, it’s a pretty cool setup.”