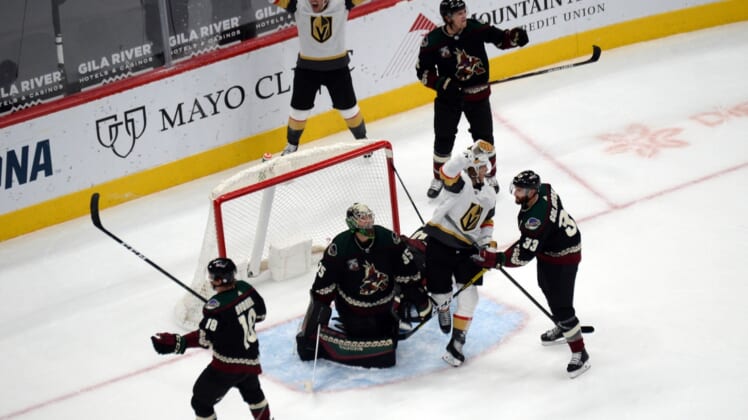 William Karlsson scored with 42.7 seconds remaining and Marc-Andre Fleury finished with 16 saves to lead the Vegas Golden Knights to a 1-0 victory over the host Arizona Coyotes on Sunday afternoon in Glendale, Ariz.

Karlsson, cutting to the net, took a centering pass from Jonathan Marchssault from behind the goal in the slot. He tapped a shot past the stick side of Darcy Kuemper and into the top left corner of the net for the game-winner.

It was Fleury’s 62nd career shutout, breaking a tie with Walter “Turk” Broda for 17th place on the NHL’s all-time list. The Golden Knights improved to 6-0 after a regulation loss under coach Peter DeBoer.

Kuemper, playing in his fourth consecutive game, had 26 saves for Arizona which lost at home in regulation for just the third time (11-3-4) since Dec. 31, 2019.

The two teams combined for just 16 shots on goal over the first 27 minutes in the tight-checking contest and 29, including 19 by Vegas, over the first two periods.

Arizona, despite attempting just four shots, had the best scoring chance in the first period when Lawson Crouse rang a wrist shot from the bottom of the right circle off the post.

Reilly Smith twice was turned away late in the second period hitting the post from the right circle shortly after Kuemper had gloved his close-in wrist. Jakob Chychrun also nearly scored for Arizona midway through the period when his shot trickled through Fleury’s pads and the puck came to stop near the left post before being swept away by defenseman Shea Theodore.

Fleury kept it scoreless early in the third period with a stick save on Phil Kessel who broke in free on a breakaway. Johan Larsson followed less than a minute later with a shot from the left circle off the far post and out.