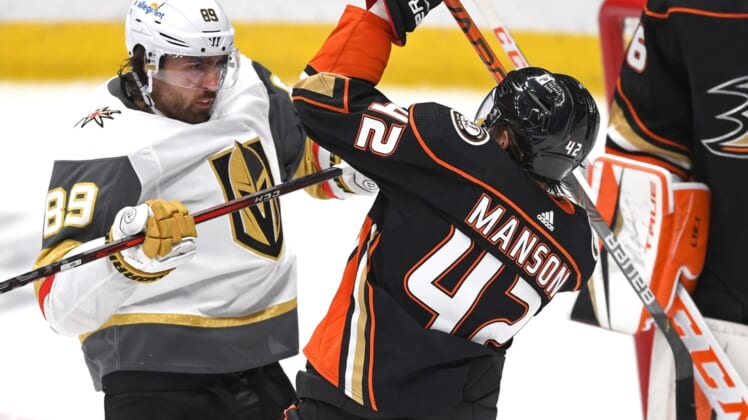 Mark Stone, Max Pacioretty and Nicolas Roy each had a goal and an assist and Marc-Andre Fleury stopped 33 shots to go along with his first assist of the season as the visiting Vegas Golden Knights moved into a tie for first place in the West Division with a 5-2 victory over the Anaheim Ducks on Sunday afternoon.

The Golden Knights tied idle Colorado for the top spot in the West with a league-high 64 points but the Avalanche, whose season is on pause until Thursday due to COVID-19 protocol, still have a game in hand.

Fleury improved to 20-10-0 for the season, the 13th time in his career that he hit the 20-win mark in a season. His assist on Stone’s second-period goal was the 18th of his career and fourth with the Golden Knights.

Vegas, which started the front end of the back-to-back with a dominating 51-shot, 4-0 blanking of the Ducks on Friday night, took a 1-0 lead at the 3:25 mark of the first period on Pacioretty’s 22nd goal of the season, a deflection of Martinez’s long shot from inside the blue line that went over Gibson’s shoulder.

Anaheim tied it at 1 three minutes later when Comtois finished a 4-on-1 break to score his 13th goal of the season and fifth in seven games against the Golden Knights.

Pietrangelo put Vegas back in front for good later in the period with his fourth goal of the season, firing a wrist shot from the left circle over Gibson’s right arm.

Roy extended the lead to 3-1 early in the second period when he beat Gibson with a wrist shot from the right faceoff dot for his fifth goal of the season.

Anaheim cut the deficit to one on Heinen’s sixth goal of the season, but Vegas answered near the end of the period with a power-play goal by Stone, who took a stretch pass from Shea Theodore and broke in on a breakaway and deked Gibson for his 15th goal of the season.

Tuch finished the scoring with an empty-net goal, his 16th of the season, with 1:27 left.