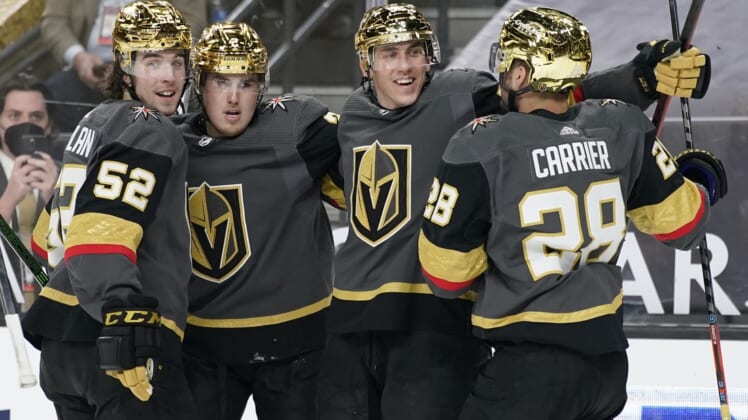 The Vegas Golden Knights will try to complete a perfect March on their home ice in Las Vegas on Wednesday night when they host the Los Angeles Kings.

Vegas made it six wins in a row at T-Mobile Arena with a 4-1 victory on Monday night in the front end of its back-to-back with the Kings, the team’s sixth streak of at least six consecutive home wins in the four-year history of the franchise, and the longest since winning seven in a row from Feb. 13-28 in 2020. The team record is eight straight wins in its inaugural season of 2017.

“Could you imagine what our record would be if we had a full house?” asked Vegas coach Peter DeBoer afterward.

“It’s a mindset that we’ve had since the beginning,” added forward Jonathan Marchessault who had two assists Monday. “We wanted to make sure it was a tough place to play in. We take a lot of pride to be good at home.

“Obviously with the fans getting back in the building it’s amazing. It makes a big difference for us.”

Only the Pittsburgh Penguins (16) have more home wins than the Golden Knights who are 14-2-1 at home and haven’t lost since some fans were allowed to begin attending on March 1. Vegas started its current streak by rallying for a 5-4 overtime win over Minnesota that night.

Reminded by a television broadcaster that the current home win streak was the team’s longest since last season, forward Reilly Smith, who had goal in Monday’s win, just rolled his eyes.

“Now you’re jinxing us, so I’ll try and act like I never heard that and just try and move forward,” Smith said with a smile. “You know, I think we’re playing good hockey right now. I guess we have a big test on Wednesday now because of that.”

The home win streak is no laughing matter when one considers that Vegas leads the West Division by just one point over Colorado. The Golden Knights, who are 13-4-0 overall in their past 17 games, conclude the current homestand with two games against third-place Minnesota beginning on Thursday night.

Los Angeles will enter Wednesday’s contest trailing St. Louis by six points for the fourth and final playoff spot, but it still has two games in hand. The Kings have dropped three straight and six of their past eight.

Los Angeles jumped out to a 1-0 lead after 60 seconds in Monday’s game on a goal by defenseman Matt Roy and controlled play for most of the first period. But Vegas answered with three second-period goals starting with Smith’s power-play rebound at the 4:04 mark.

The Golden Knights then cruised to an easy victory behind Robin Lehner’s 24 saves.

“If you can get up another one or two (goals), you’d have a cushion for some of the mistakes that we made,” Kings coach Todd McLellan said. “I still didn’t think we played a real poor game. … They took advantage of some bounces around the net, put the puck over the goal line. When we had those opportunities, we didn’t do it.”