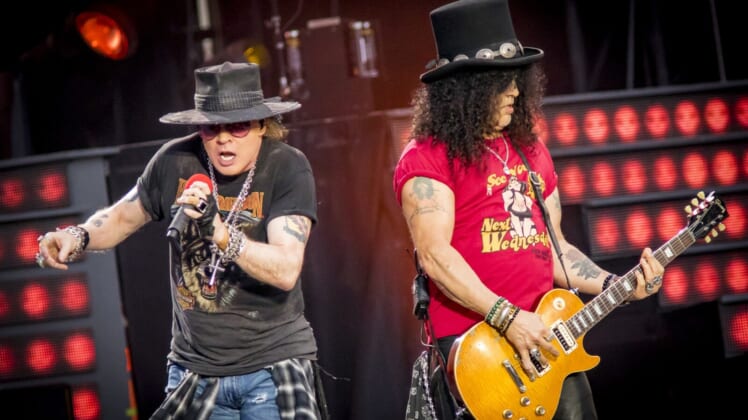 OTTAWA, ON – AUGUST 21: Axl Rose and Slash of Guns N’ Roses perform onstage during the ‘Not In This Lifetime’ Tour at TD Place Stadium on August 21, 2017 in Ottawa, Canada. (Photo by Mark Horton/Getty Images)

In addition to its increasing number of world-class sporting events, Las Vegas concerts also offer visitors and locals alike the opportunity to see some of the hottest acts to grace the stage. Dating back to the many who invented the Las Vegas residency – Elvis Presley – Sin City continues to be a hotbed for live music from many of the industry’s top names.

Las Vegas concerts are back!

Here’s a look at must-attend Las Vegas concerts through the end of the summer and the fall. Check back for added dates as they are announced.

Usher – The Residency, The Colosseum at Caesars Palace, Aug. 3-14

Called an “R&B teen dream” by Rolling Stone, Usher was only 15 years old when he released his self-titled second album in 1994. (The album was executive produced by hitmaker Sean “P. Diddy” Combs.) Usher’s 1997 hit single “You Make Me Wanna…” gained him international fame, and his album My Way earned him the 1998 Billboard Best Performer of the Year award. A sultry R&B singer in the old-school mode of Marvin Gaye and Luther Vandross, Usher has never been afraid to show off his muscular new-school physique. Tickets.

Since his debut in 1996, the larger-than-life star has sold over 11 million albums and charted more than 37 singles, sending 14 into Billboard’s Top 10. He’s also racked up two billion streams and boasts a reputation for fiery live performance – not to mention his multiple Grammy nominations, awards from the ACM and CMT, and a willingness to think outside the box. Adkins lights up the Las Vegas concerts scheduled with his take-no-prisoners country act on August 14th in Henderson at Sunset Station. Tickets.

Richard Marx returns to the Las Vegas concerts scene to play his string of successful hit singles from the late 1980s and early 1990s, including “Right Here Waiting,” “Hazard,” and “Hold on to the nights.” Although most of his successful songs were slow ballads like these, many of his songs had an upbeat, classic rock style, such as “Don’t Mean Nothing,” “Should’ve Known Better,” “Satisfied,” and “Wait For the Sunrise. He plays at the Green Valley Ranch Events Center in Henderson at 8 pm on August 20. Tickets.

For more than 50 years, Santana has sold over 100 million records and has performed for three generations of concert fans worldwide. To date, Santana has won 10 GRAMMY Awards and three Latin Grammys. Santana, who owns a home and splits his time living in Las Vegas and Hawaii, returns to The House of Blues for another residency this time playing a selection of his greatest hits. Tickets.

Allegiant Stadium, home of the Las Vegas Raiders of the NFL, hosts its first true big rock concert as Rock n’ Roll Hall of Famers Guns n’ Roses return to the Las Vegas concerts scene. Guns N’ Roses are an influential American hard rock band founded in Los Angeles in 1985. They are often credited with bringing rock n’ roll back into the mainstream during the late 1980s, resurrecting the styles of bands such as Aerosmith and The Rolling Stones during a time when hair metal and glam rock had been dominating the airwaves. Opening the big stadium show is another name known for rock royalt – Van Halen. This time in the late Eddie Van Halen’s son Wolfgang brings his Mammoth WVH project to the stage. Tickets.

Don’t miss Morrissey’s Las Vegas residency from August 28th – September 5th. The show will serve as an intimate, invigorating dive into his expansive career from his early days to the new album. Hear his solo hits along with Smith’s classics as well. Tickets.

George Lopez’s multi-faceted career encompasses television, film, stand-up comedy and late-night television. Lopez can be seen in his Netflix original comedy special “We’ll Do It For Half,” which premiered in June 2020. Last year, Lopez embarked on his The Wall World nationwide stand-up comedy tour. Tickets.

Considering Everclear has written and recorded some truly iconic ’90s alt-rock hits, it would be all too easy these days for the band to be a victim of its past successes, relegated to performing as a glorified jukebox, existing to satisfy the nostalgic cravings of Gen Xers everywhere. Tickets.

Chicago and the signature sound of their horns, vocalists and classic songs mark the band’s 52nd consecutive year of touring with a short stint at The Venetian on the Las Vegas Strip. Tickets.