Las Vegas’ Beer Park, a prime spot to catch some brews and football

I had the opportunity to hit up Budweiser’s Beer Park in Las Vegas Saturday night. It’s a hip joint on a rooftop next to the Paris Hotel, overseeing the strip.

Being given the VIP treatment from the great folks at Beer Park, I was able to taste some of the beers they had on tap while chomping down on some food and taking in the entire experience.

It was just lucky that my Notre Dame Fighting Irish were on many of the huge television screens within the park. That added to the experience.

First off, it’s called Beer Park for one reason. It’s set up like a city park with benches and games to play. That’s the originality of the destination. Also adding to its originality is that it sits on a rooftop overlooking the strip.

Pretty amazing views were to be had. 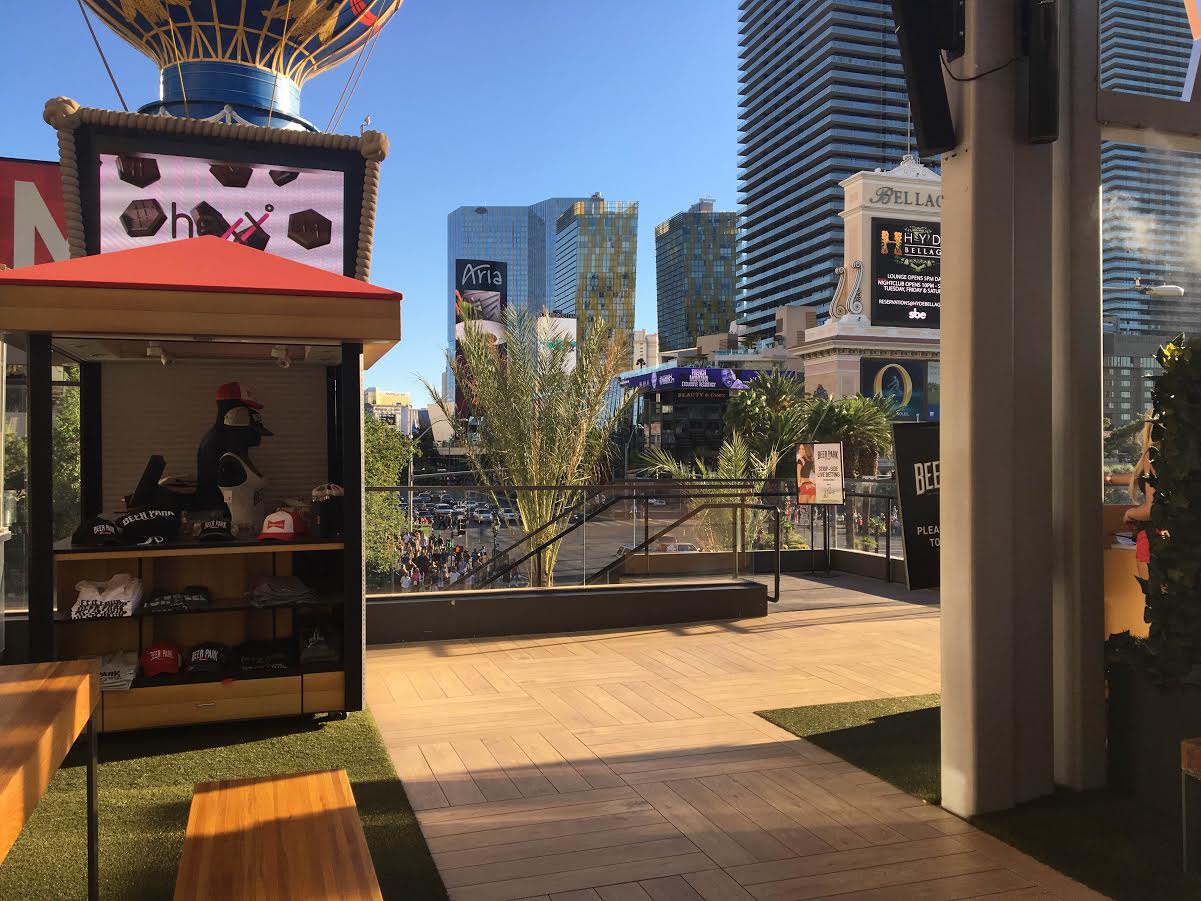 Also important to note, the bar/restaurant was created by Budweiser, meaning that the beers on top had a distinct Budweiser feel to them.

My beer-tasting experience started out with a flight of four six-ounce brews. I decided on the Kona brand with Big Wave, Longboard and Lavaman Red Ale representing the three from that brand. In addition to that, I went with the Shock Top Belgian White. 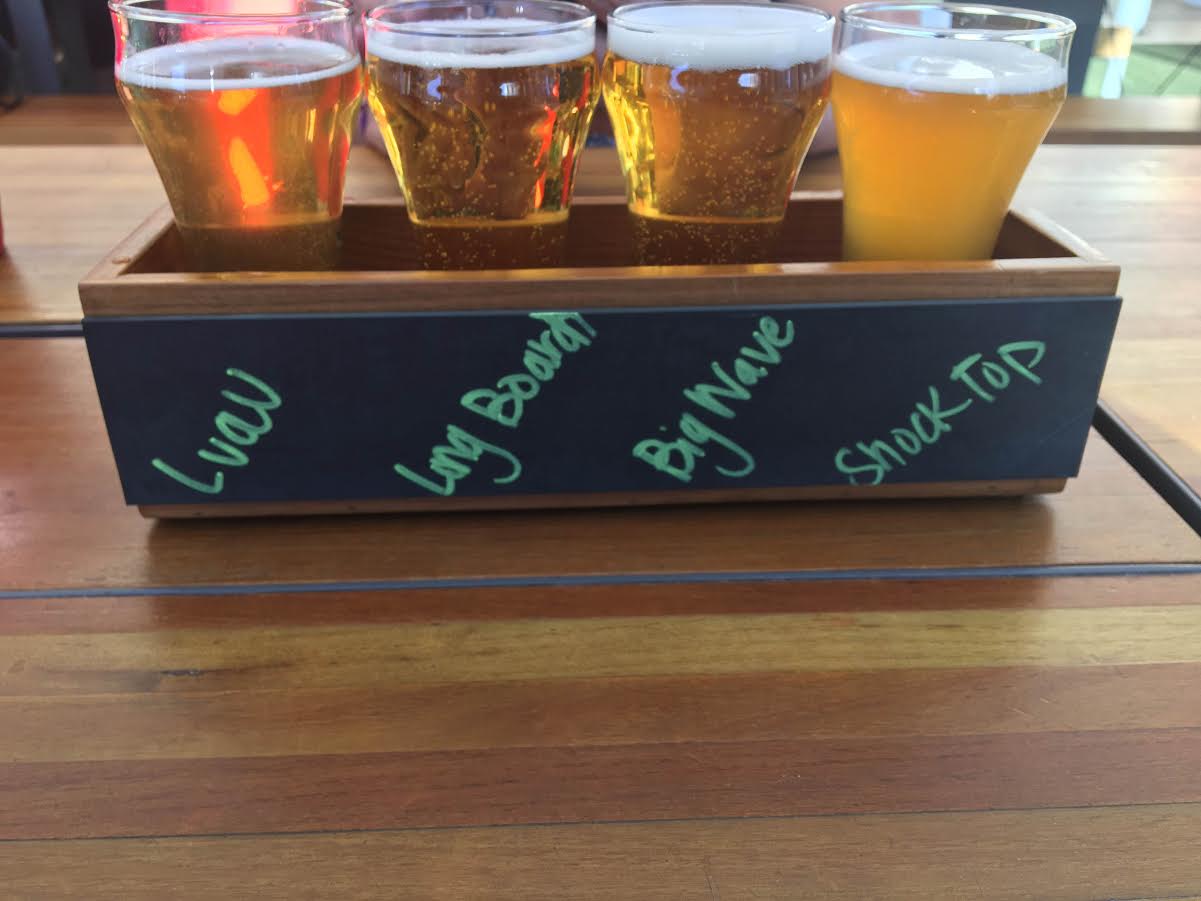 Okay, so for the purpose of full disclosure, I wasn’t new to the entire Kona thing. And in reality, Big Wave is a personal favorite.

But as most of you beer aficionados know, the taste of brews on tap have a lot to do with the taps themselves. Too often, especially when this one scribe lived in the Bay Area, taps were dirty. That really does impact the beer-tasting experience itself.

No such problems at Beer Park. The taps were obviously clean, leading to a tremendous beer-tasting experience.

The best beer I tasted on tap had to be Shock Top’s Twisted Pretzel. No lie here, it legitimately smelled and tasted like a salted soft pretzel with an aftertaste that wasn’t too hoppy. Heck, after tasting someone else’s flight of it, I ordered a 16 ounce version for myself.

Regarding the beer, this isn’t a dive-bar establishment, and the prices suggest just that. 16 ounce Bud Light on tap went for $8.50. That’s why the recommendation here has to be to go with the craft beer or flights, as you can see on the menu itself. 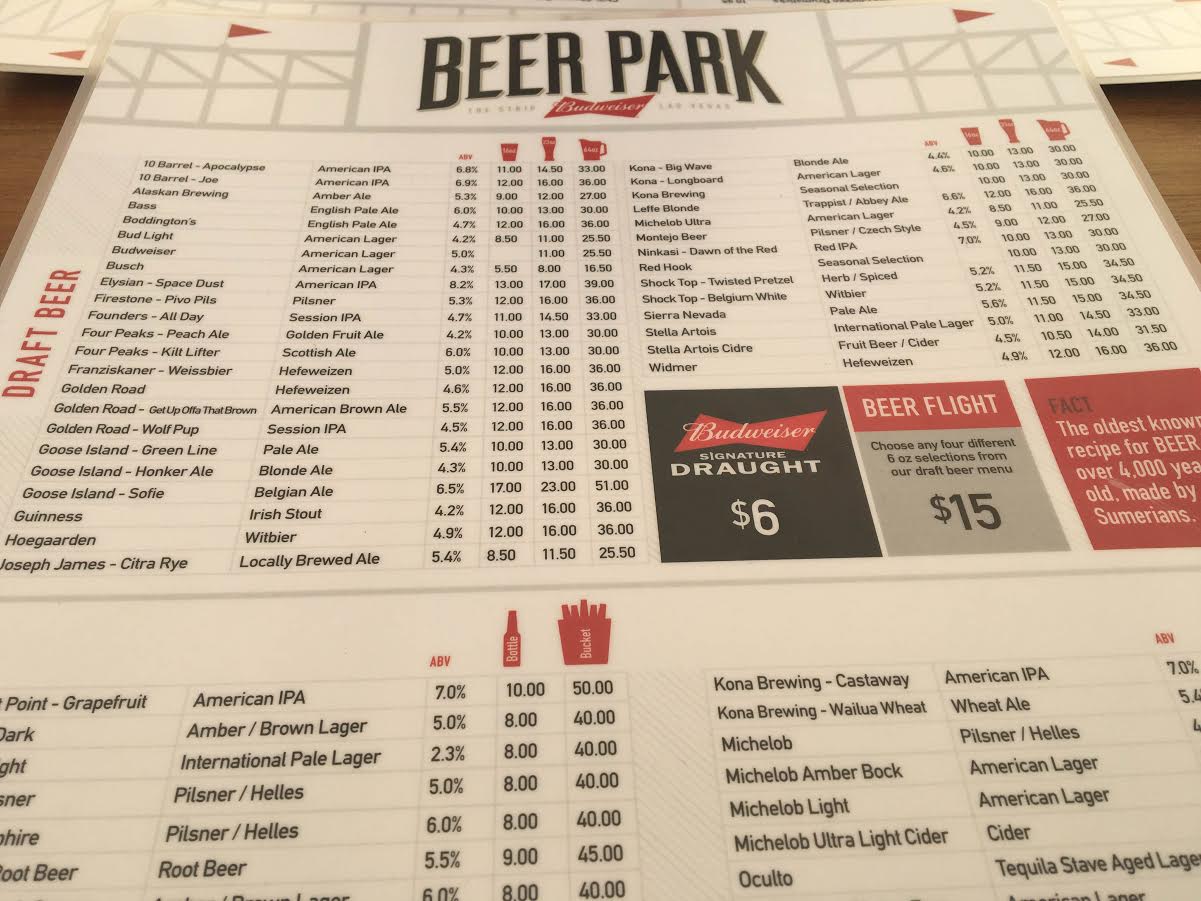 The food was absolutely outstanding with an exception of their macaroni and cheese egg rolls. Bland taste that needed a ton of dipping sauce.

It was, however, the smothered waffle fries that represented the mouth-watering taste. We’re talking about some crispy fries with barbecue sauce and barbecued pork (both to die for). 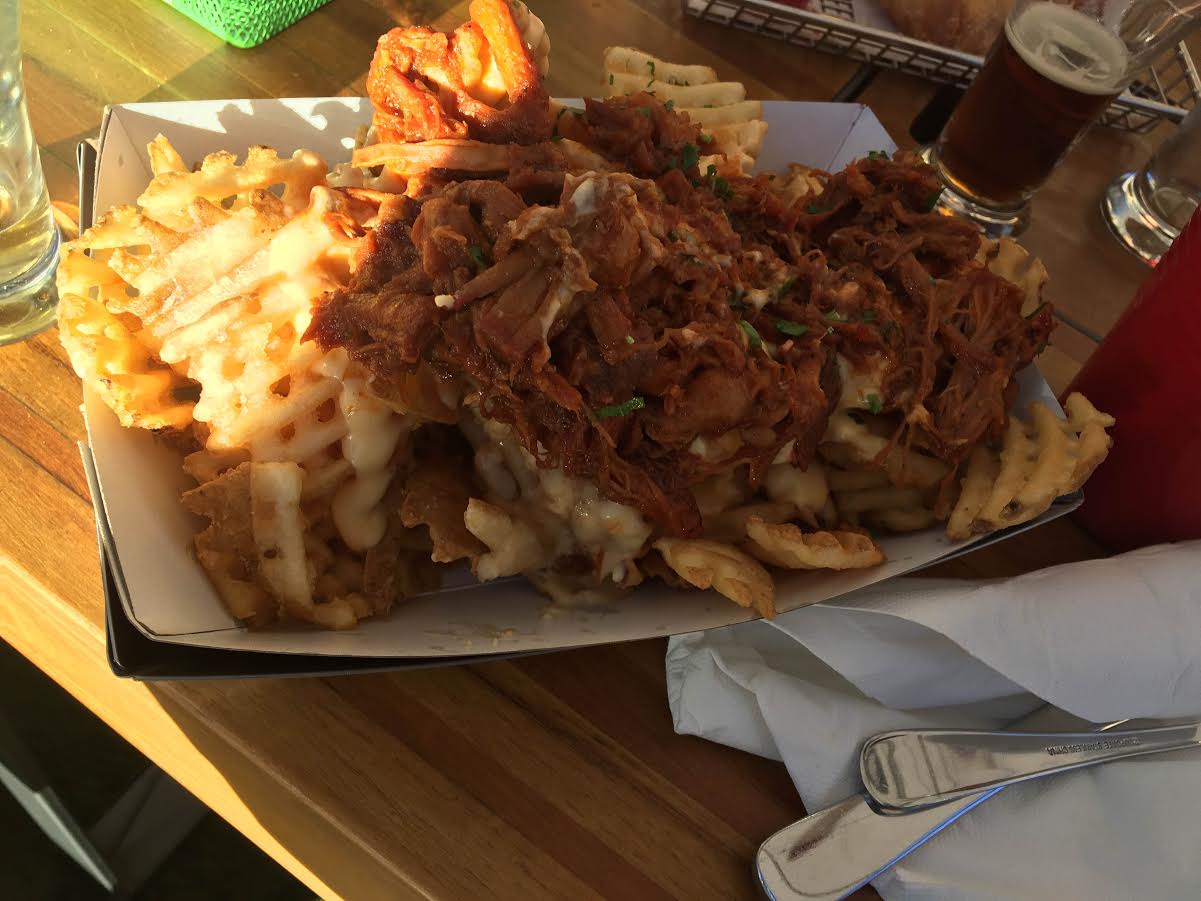 At under $11.00 for a large appetizer, you can get away with sharing this with two or three people. It’s what I did.

There’s certain things that added to the ambiance here. We already covered the location. Considering this was still during the day, one has to believe the picturesque view is magnified even further at night.

Though, the primary thing to take away from this was the games they had for us to play. Anything from human-sized Jenga to pool tables and life-sized Connect Four could be played.

There are a couple more important things to note.

Positive. They do not allow smoking in the establishment. This is a rarity for Las Vegas, especially open-air environments. If you’re inclined to smoke, you have to take it to the steps.

Also a positive. They do serve hard alcohol. It’s not just a beer joint.

Despite this, there were no disorderly drunks. Though, that could have had to do with the time of the day. Simply put, people were just enjoying themselves here.

Considering the time (just after 5 pm local time), it was pretty darn hot up on the rooftop (about 102 degrees). That’s Las Vegas for you in early September. There’s not much Beer Park can do about that.

Though, they did have some pretty awesome coolers on the tables for the hotter days.

The staff was extremely friendly with the servers paying close attention to making sure your drink glass was never empty. While that could have had to do with me being given the VIP treatment, I did notice that service wasn’t rushed when it came to the other patrons at the bar.

Overall, I’d have to give Beer Park a solid 4.5 out of 5 stars. The staff, led by general manager Jason Ellefson, was tremendous. The beer was awesome, and for the most part, the food was great.

In the end, the bill ran $95.00 with tips for two flights, a 16-ounce beer, a bacon cheeseburger and the two appetizers. Not too shabby for a fun early evening in downtown Vegas.