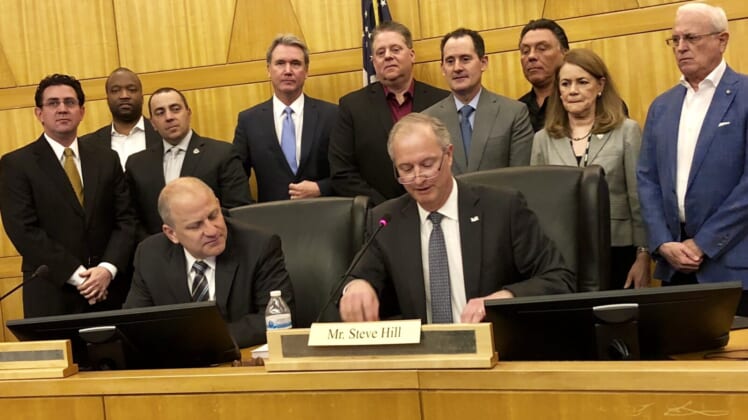 The Oakland Raiders’ Las Vegas Stadium development plan and lease have been approved and signed, marking the end of the 35-year sojourn for the team that has called Oakland (twice) and Los Angeles home.

After breezing through 35 agenda items at breakneck speed, the Las Vegas Stadium Authority unanimously approved every aspect of its agreement with the Oakland Raiders today, removing any obstacles to the project and the team’s relocation to Las Vegas.

It was surreal for me to sit in the chamber at the Clark County Government Center and see the culmination of a two-year odyssey come to an end.

In the 12 years I’ve lived in Southern Nevada, there have been fly-by-night hucksters promising professional sports and new stadiums or arenas. There was a series of failures in leagues such as the Arena Football League, indoor soccer and even minor-league hockey. None of it stuck, and many developers used plans for Las Vegas to become a major-league city as leverage for another project somewhere. After a while, locals and transplants grew skeptical. Any talk of an NFL, Major League Baseball, NBA or NHL team was met with disdain and disbelief.

Now, though, there is no question the NFL is coming to Las Vegas in the form of the iconic Raiders.

Today’s largely procedural and ceremonial meeting cemented that fact as both parties – the Raiders and the LVSA – signed on the dotted line committing to the $1.9 billion project. That includes the stadium itself, and the Raiders’ new training facility and headquarters in nearby Henderson.

Raiders President Marc Badain, team owner Mark Davis’ point man on getting the stadium project done, said the franchise and its players and staff are excited about coming to Las Vegas in 2020.

“We’re proud to be a part of it [community in Las Vegas],” Badain said. “It’s something we’re proud to associate our franchise and its history with – our players, coaches and fans.”

It’s the team’s full-scale adoption of Las Vegas as their future that has already cemented it as a mainstay in the community. They now have 30 employees in Las Vegas, according to Badain, and are already laying the groundwork much in advance of their arrival.

Las Vegas was built on people seeking opportunity. People come in droves with dreams and often leave busted. Yet many come and make new lives, new careers and new fortunes. It’s always had an allure that drew people in. The Raiders and the NFL – intelligently – realized it was an untapped market ready and yearning to be part of the club.

The NFL, which over the years has been critical and leery of legalized gaming, hadn’t considered Las Vegas until last year. It’s a remarkable about-face. Badain said the NFL is not the only organization accepting of having a franchise in Glitter Gulch.

The Raiders $1.8 billion stadium will be enclosed and utilize a natural grass surface.

“They [NFL owners] made the decision last year that they believed in this market,” he said. “This week, they invested in the project with approval of the financial end of it, and that’s a pretty big endorsement.”

The NFL, the Raiders, Las Vegas and the State of Nevada now are all pregnant. The baby is coming and it will come fast. Slated for completion in August 2020, LVSA Board Member Tommy White of the Laborers Local 872 (the team of laborers who will build the stadium) has made it his mantra to “Beat L.A.” and complete it by May 2020. That’s when the Los Angeles Rams’ new $5 billion stadium complex (where the //Los Angeles Chargers are tenants) will be finished.

And, even though Las Vegas’ monstrous and audacious hotels and casinos are built more on losers than winners, don’t bet against White and his crew. Either way, the project has left the dock and it’s smooth sailing ahead.

Much like people over the years have belittled and bemoaned Las Vegas as a town without soul, substance and community, so, too, did the world of professional sports. But now, the city of almost 2.3 million inhabitants is part of the club.

It’s a proud day for the Raiders, to be certain. For the first time in their illustrious history, they will have a football-only facility they can call their own. It’s a game-changer for a franchise that has struggled for almost two decades. They’re no longer the NFL franchise roaming the desert like Moses. They’ve seen the promised land and will enter it.

The Raiders’ promised land, as it turns out, is Las Vegas.