For the second game in a row, the Las Vegas Aces pull out a victory over the Washington Mystics on their home floor, beating them 93-83.

The Aces secure their third straight win and took sole possession of first place in the WNBA, improving their record to 17-6.

As a result of their loss, the Washington Mystics have dropped to 8-12 on the season, By virtue of the Dallas Wings win over the Chicago Sky, the Mystics now drop below the playoff line.

For the Mystics, Tina Charles led all scorers finishing with 30 points, 10 rebounds and two blocks while Ariel Atkins chipped in 24 points.

With 2:21 remaining in the second quarter, the Mystics swung the game in their favor going on a 10-2 run to secure an eight-point lead going into halftime.

The Mystics’ capitalizing off of Aces’ turnovers was key to their run with the Aces committing six second quarter turnovers. Tina Charles scored 17 points in the second quarter including the final shot of the half to extend the Mystics’ lead.

Similar to their last meeting, Liz Cambage was the catalyst of an Aces run to take back the lead this time happening in the third quarter. Cambage scored seven of the Aces’ first nine points in the period as they cut the Mystics lead to one point. 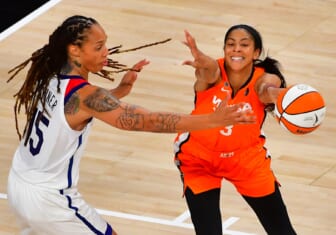 Both teams traded the lead for the remainder of the quarter ending with the Aces leading 69-67. It was in the fourth quarter that Kelsey Plum helped lead the Aces to victory down the home stretch.

Plum scored 14 fourth quarter points including hitting two 3-pointers nearly outscoring the Mystics as a team who scored 16 points in the period. The same thing that spurned a Mystics run in the second quarter is what cost them the game in the second half as seven of their eight turnovers came in that time.

Following a six-day layoff, the Aces will return to the court to face the Connecticut Sun in what could be a WNBA Finals preview. Meanwhile, the Mystics will be back on the court Thursday looking to get back above the playoff line facing the Phoenix Mercury on the road.