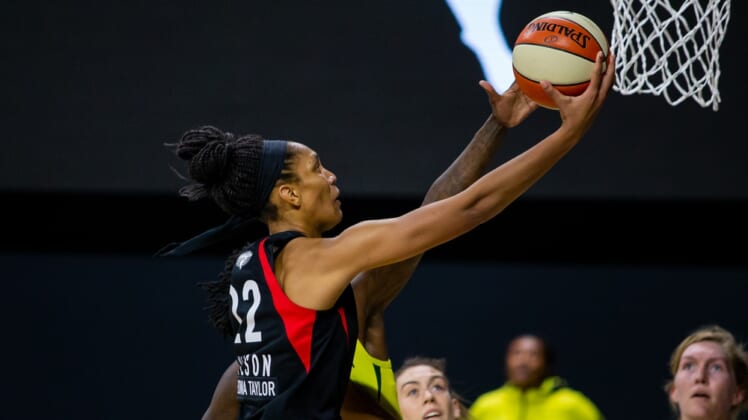 Despite an incredible fourth-quarter run by the Washington Mystics, the Las Vegas Aces escaped with a 96-93 victory on Saturday.

The Aces improved to 7-3, winning five of their last six games, and now own the third-best record in the WNBA. As for Washington, its second consecutive loss drops the record to 2-5.

Liz Cambage led Las Vegas with 24 points and 11 rebounds, with Jackie Young contributing 22 points, four rebounds, three assists and three steals. The win might have come at a cost for the Aces, with exiting in the final minute due to a knee injury

The second quarter saw Liz Cambage begin to assert herself offensively scoring 14 points of her 16 first-half points in the period. Myisha-Hines Allen scored 11 points ending the half with 21 points hitting the final shot to give the Mystics a 57-56 lead at halftime.

The first half saw Riquna Williams, Liz Cambage and Jackie Young combine for 43 of the Aces’ 56 first-half points.

The Aces’ defense picked up in the second half not allowing a single score in the paint for the Mystics compared to the first half allowing 32 points in the paint. This allowed them to take a 90-77 lead with 4:11 remaining in the fourth quarter.

However, the Mystics began to catch fire from beyond the arc with Myisha Hines-Allen and Ariel Atkins hitting three 3-pointers as part of a 13-0 run to tie the game up with 60 seconds left in the game.

Wilson helped the Aces take back the lead with a putback layup off an offensive rebound. The Aces cashed in on free-throw attempts late, securing the victory.