The Las Vegas Aces wouldn't be denied on Friday in a blowout win over the Indiana Fever. Find out who contributed to their record-setting scoring performance.

In a Friday night matchup against the Indiana Fever, the Las Vegas Aces (4-2) put on a dominant performance and set a single-game franchise scoring record in a 113-77 rout.

Six players scored in double figures for the Aces. Dearica Hamby came off the bench to lead the Aces in scoring with 25 points (two points shy of tying her career-high) on 64% shooting, along with five rebounds and three assists.

The game was never in doubt outside of the opening minutes when the Fever made the first basket of the game. The Aces ended the first quarter with a 30-13 lead and would hold a double-digit advantage for the remainder of the game.

Trailing 48-22 with 6:13 remaining in the second quarter, the Fever outscored the Aces 25-9 to trim the lead to 10 with 29.5 seconds left in the half. This would be the closest the Fever would get the rest of the way, as the Aces went into halftime up 12. 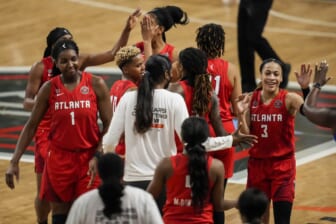 For the remainder of the contest, the Aces took complete control, leading by as many as 43 points. The 36-point margin of victory for the Aces is the largest of the WNBA season so far, surpassing the Washington Mystics’ 29-point romp over the New York Liberty on May 21.

This is the Aces’ second “W” this season by at least 25 points, with their first coming by a score of 97-69 against the Los Angeles Sparks.