It’s time to come home, Larry. The Arizona Cardinals appear to have completely moved on from Larry Fitzgerald. By adding A.J. Green in free agency and Rondale Moore with the 49th pick in the 2021 NFL Draft, it appears Fitz may need a new team. That’s if he wishes to continue his 17-year NFL career.

Should Fitz hang up the cleats, he would be a first ballot Hall of Famer. In the past, Fitz has said he would prefer to play for the Cardinals his entire career and nowhere else. There is no indication his feelings have changed.

Sure, the 11-time Pro Bowl receiver’s best football days are behind him. Still, Fitz would bring another dependable receiving option to the Minnesota Vikings at what would likely be a relatively low cost.

How much does Larry Fitzgerald have left in the tank?

While we don’t know an exact reason why Fitzgerald has yet to sign with a team or announce what could be his retirement, it’s possible his dwindling role within the offense is contributing to him still being unsigned.

Fitz will turn 38 before the 2021 season begins. He hasn’t made a Pro Bowl or had a 1,000-yard season since 2017. With that said, the numbers Fitz has still put up over the past three seasons dwarfs anything the Vikings have had for a third receiving option in that same time.

Known to also be a great run-blocker, his hands are still as reliable as ever. In 2020, Fitz posted a 75% catch rate on passes thrown his way, which was second-best percentage of his career. Not only can Larry Legend play all receiver spots on game day, but his experience and level of expertise to go along with his professionalism could also help make up for Kyle Rudolph’s absence going into 2021.

For the Minnesota Vikings, signing Larry Fitzgerald Jr. could be a great move to help sell tickets and build excitement about a Minnesotan coming back home to play for the team he grew up rooting for. Worst case scenario, the Vikings can move on if the situation is not working out as expected. For general manager Rick Spielman, he’s got nothing to lose by bringing in the future gold jacket receiver.

Not only would he be able to add something on game day, but Fitz could also serve as a mentor to fellow players throughout the season. The 2016 Walter Payton NFL Man of the Year recipient would be able to teach other Vikings how to be a pro and set a good example helping within the community Fitz grew up in. For Fitzgerald, returning home could bring his career full circle. 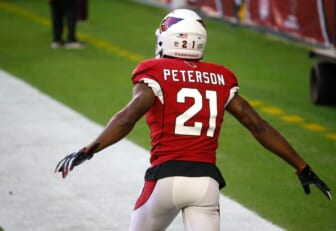 His father is a writer for the Minnesota Spokesman-Recorder. He’s been covering sports for the Twin Cities and other areas of Minnesota since 1978. Being able to cover what could be his son’s final NFL games locally could provide for a storybook ending.

For Larry Fitzgerald Jr., spending time on Minnesota sidelines again would be a reunion of sorts.

On top of all that, he could fill the third receiver role on Sundays as he continues his quest for the first Super Bowl ring of his storied career. For Fitzgerald, returning home to play for the team he grew up rooting for, even as the ball boy for a few years at the Metrodome during the days of Cris Carter and Randy Moss, could be the final stepping stone of his playing career.

While Fitz was there, Randy Moss and Cris Carter helped show him the ropes. Maybe if he came back, he could show a few current young receivers on the Vikings how to further their careers. Surely, after a 17-year NFL career, Fitzgerald has a few things to share.

Seeing Larry Fitzgerald at Vikings games again seems too good to be true. Perhaps an impending retirement is the reason signing Fitz to a contract has not happened yet. Whatever the decision is, Fitzgerald will have plenty of fans rooting him on during his next adventure.