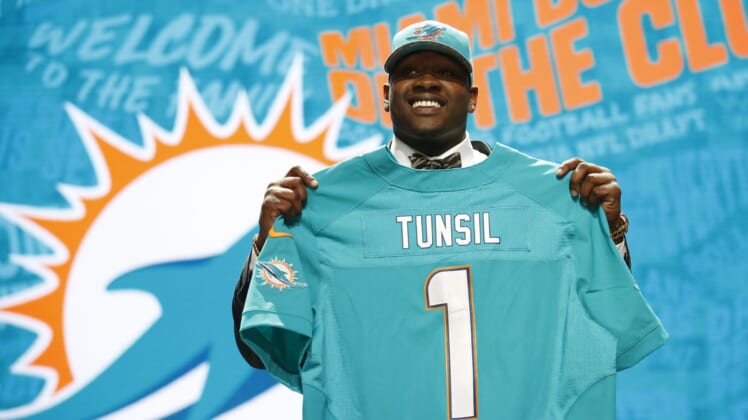 Leave it to vendors in New York City to look to cash in on one man’s misfortune.

Less than two weeks after former Mississippi offensive tackle Laremy Tunsil dropped in the 2016 NFL Draft due to a leaked video showing him smoking marijuana out of a gas mask, a specific piece of paraphernalia can by found on the streets in New York City:

Via @MichaelDelTufo these r 4 sale on NYC streets #TunsilEffect
BG Street meat truck is what scares me most in pic pic.twitter.com/aAeHgNE83x

Tunsil may have lost millions after dropping from a top-five pick to the Miami Dolphins at 13, but who says our capitalist economy shouldn’t allow others to benefit off his misfortune?

Unrelated. Does anyone here find it funny that Tunsil’s gas masks are hanging right by a Snoop Dogg vaporizer? It’s like they were made for one another.

On a serious note. The video depicting Tunsil smoking marijuana is said to be years old. He’s turned the page on that unfortunate situation and appears to be ready to move on with his NFL career.

This doesn’t mean people are going to be letting the first-round pick forget about it anytime soon.