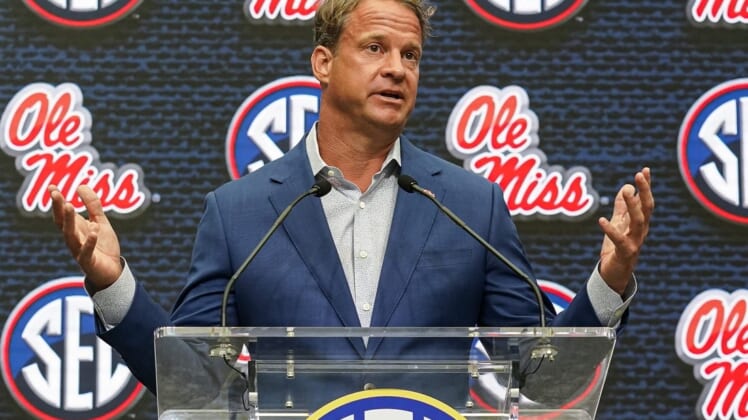 Ole Miss coach Lane Kiffin did not hesitate to renew his concerns regarding name, image and likeness when he took to the podium at SEC Media Days in Atlanta on Monday.

Kiffin originally expressed his grievances with NIL during an interview on National Signing Day in February, making some light-hearted comments regarding the amount of money he believed Texas and Texas A&M offered recruits in the 2022 recruiting class.

Kiffin, who will be in his third season at Ole Miss, his fourth head coaching job, has not been reluctant to share his feelings about rules for providing compensation to college athletes.

“It’s like a payroll in baseball,” Kiffin said Monday. “What teams win over a long period of time? Teams that have high payrolls and can pay players a lot. We’re in a situation not any different than that. I said day one, you legalize cheating, so get ready for the people that have the most money to get players. Now you have it.”

Kiffin was also bothered that there is no upper limit on NIL funds, and coaches do not determine how those funds are distributed.

“If you got boosters out there deciding who they’re gonna pay to come play and the coach isn’t involved in it, how’s that work?” Kiffin said. “Do they just go pick who they want?”

First-year LSU head coach Brian Kelly chimed in on NIL, but with a much softer stance.

“I don’t feel like we’re being outbid by anybody,” Kelly said. “I don’t think that’s the place of NIL anyway.”

In Kelly’s 18 seasons, he is 166-62, including 113-40 in 12 years at Notre Dame before he took the LSU job in November. He also coached at Central Michigan and Cincinnati.