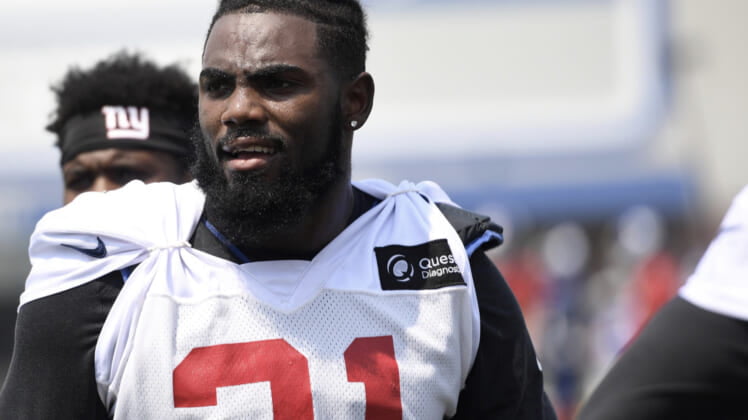 The Washington Redskins received their fair share of criticism for making three-time Pro Bowler Landon Collins the highest-paid safety in the NFL on Monday.

Collins, 25, will officially sign a six-year, $84 million contract once free agency opens up on Wednesday. Given his shortcomings in coverage and other factors, this seemed like a massive overpay.

Though, at some point, we have to look beyond the gridiron. He have to look at the man and why he made the decision to trade Giants’ blue in for the Redskins’ burgundy. In this case, we don’t have to look any further than the late-great Sean Taylor and another tragedy that defined Collins’ pre-NFL life.

The NFL’s best safety during his four-year career with the Redskins, Taylor’s life came to a tragic end during a robbery gone wrong in his Miami home. The year was 2007 and Taylor was just 24 years old.

Just 10 years old when Taylor made his debut with the Redskins after being selected No. 5 overall in the 2004 NFL Draft, Collins idolized the fellow safety.

How much? Collins wore Taylor’s now-famous No. 21 during his days with the Giants. Taylor was the one he looked up to. More than the likes of Ed Reed and Charles Woodson, it was all about this Miami (F) product dominating on the grandest of football stages.

When Collins first took the field as a visitor at FedExField in Landover as a rookie back in 2015, he opened up big time about what it meant for him.

“When I go out there and do warm-ups and stuff, I just want to look at the memory of him and his name up there and stuff like that,” Collins said back in 2015, via Newsday. “It’s going to be fantastic and it’s going to be a dream come true to be on the field he played on.”

It was significant. Even as a member of the Redskins’ division rivals, Collins was awed about playing on the same field as his idol. It was a moment that struck the then-young former Alabama standout. It was the defining moment of his rookie season. Hallowed halls. Life coming full circle.

Collins’ first appearance as a pro in Landover came nearly eight years to the day after Taylor was killed in the above-mentioned home invasion — leaving behind a young family in the process.

It also came 10 years after Collins and his family acted the part of refugees in abandoning New Orleans following Hurricane Katrina in 2005. He eventually settled in Geismar in Ascension Parish. That life-changing event was just a couple years before Taylor’s untimely death.

For Collins, this led to him focusing on football as an outlet to the harsh realities that life itself brings. He wasn’t immune to the struggles normally reserved for adults. He had grown up at a young age.

“All I can remember was when it hit, we were right there in northern Mississippi at my grandpa’s old house,” Collins said back 2014, via AL.com. “I remember the wind hitting harder and harder and thinking the storm is about to hit us too. We were nine, 10 hours away and it was about to hit us. That was the worst vision and experience I’ve ever experienced. All I could think about was, would I have a home to go to?”

“It was hard for him (grandfather) to get through it. Because when Katrina hit, the place we were staying at, when we got back it was nothing but a slab left,” Collins remembered back in 2016, via NY Daily News. “Half of it was two blocks away and we couldn’t find the other half anywhere.”

Collins continued to focus on football as an outlet. He once said that his father, Tom, was the “most influential coach” he ever had in his lifetime. It’s that coaching — in life and football — that certainly made Collins the man he is today.

It also allowed Collins time to grieve the passing of Taylor while paying respects to the man he grew up idolizing.

“I cried. That’s a definite,” Collins said during the 2015 NFL Scouting Combine when asked about Taylor’s passing, via NFL.com. “I idolized Sean Taylor for his physical play, his passion for the game, you could see it every time he touched the field. And I like being physical in the box.”

Just as he was preparing for the biggest job interview of his career, Collins was paying respects to a man that had passed prematurely years before. He was talking about Taylor as both a man and a football player. He was choked up.

It’s stories like these that allow us to remember NFL free agency and football in general is about much more than contracts and stats. These are real people. They have real emotions. They have backstories.

So while we act as pundits or read what pundits might have to say, remember that individuals like Collins are not immune from the heartbreak that life brings. That they have obstacles and tragedies to overcome. That they are not simply a name on a jersey or a number on the box score.