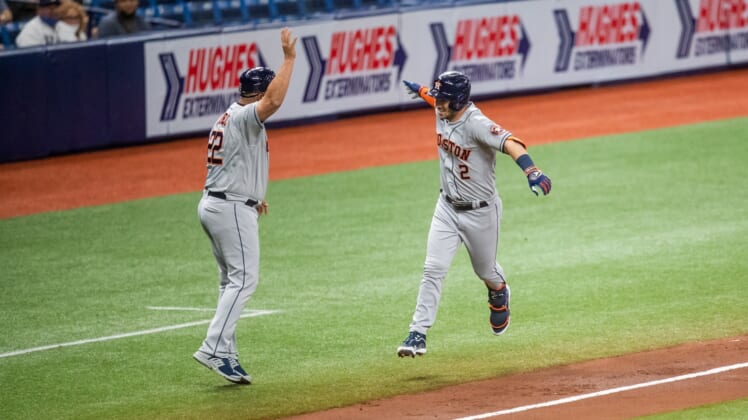 Aledmys Diaz posted four RBIs on two hits, and Alex Bregman (2-for-5) hit a two-run homer for the Astros, who tallied 15 hits and are 4-1 in their last five games.

Houston roughed up left-hander Ryan Yarbrough (1-3) for five runs on nine hits over six innings. The left-hander struck out five and walked one in his third rough showing in four total starts.

Brandon Lowe registered two of his club’s six hits, and Willy Adames had a two-run single in the ninth.

In their first encounter since the 2020 American League Championship Series that the Rays won in seven games, Houston scored in the first inning against Yarbrough, who entered the game leading the majors with a 23 percent hard-contact rate.

However, Brantley, Yordan Alvarez and Correa rapped hard singles off Yarbrough in the frame, with Correa’s slash to left driving in Brantley for a 1-0 lead.

With Brantley back on after a one-out single in the third, Bregman barreled up a 2-1 changeup from Yarbrough to left for his fourth homer and a three-run lead. Diaz’s RBI groundout to short later plated Alvarez.

McCullers ran into trouble in the third after a pair of two-out walks, but he fanned Lowe on a sweeping curve.

Two batters after catcher Martin Maldonado’s fourth career triple to start the fourth, Brantley pushed it to 5-0 by dropping an RBI single into left off Yarbrough — three singles to every outfield position.

Lowe doubled with one out in the sixth, but McCullers bore down and got Yandy Diaz on a long flyball to right and struck out Joey Wendle on a tailing changeup.

Houston’s Diaz sent home Brantley in the seventh on a single and doubled in two more in the ninth.

With two outs, Adames broke an 0-for-25 skid with a single to center to prevent the shutout.