LaMonte Wade Jr. belted two home runs and a double, Wilmer Flores triggered a three-run sixth inning with a homer and the host San Francisco Giants salvaged one of three from the last-place Pittsburgh Pirates with a 6-1 victory Sunday afternoon.

Left-hander Alex Wood (9-3) combined with four relievers on a five-hitter for his fourth straight win, helping the Giants gather a bit of momentum with the rival Los Angeles Dodgers coming to town.

Wade, who entered this year with two career homers in 42 games, made it 12 in 49 for the Giants this season with a leadoff longball in the first and another solo shot with one out in the third.

The first-inning homer drew the Giants even after the Pirates had scored on a John Nogowski RBI single in the top of the inning. His third-inning blast gave San Francisco the lead for good at 2-1.

Wade’s double came in the fifth, giving him 10 total bases in the game. He became the second Giant with 10 or more total bases in a game this season, matching the feat of Flores when he had two homers and two singles in a win over the Philadelphia Phillies last month.

Pittsburgh’s Adam Frazier was hitless in four at-bats and was removed after the top of the eighth amid reports he was traded to the San Diego Padres. 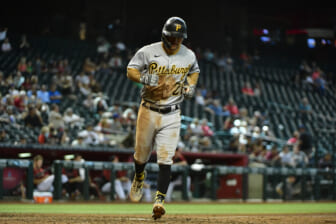 The Pirates pulled starter JT Brubaker (4-10) after four innings, and the Giants got to the Pittsburgh bullpen for their three-run sixth.

After Flores’ one-out solo homer, his 12th of the year, Steven Duggar scored on a throwing error and Curt Casali followed with an RBI single, making it a three-run inning and a 5-1 lead.

Brubaker allowed two runs and three hits in his four innings. He walked one and struck out six.

The Giants’ uprising in the sixth came after Jay Jackson denied the Pirates in a bases-loaded, one-out situation in the top of the inning by getting Kevin Newman to ground into an inning-ending double play, preserving San Francisco’s 2-1 lead.

In running his unbeaten streak of starts to eight, Wood was charged with one run on five hits in 5 1/3 innings. He walked two and struck out eight.

Jarlin Garcia, Tyler Rogers and Jake McGee followed Jackson to the mound for the Giants, each throwing a hitless, scoreless inning.

Thairo Estrada added a leadoff homer in the last of the eighth, his third of the year, to complete the scoring.

Estrada finished with two hits, while Bryan Reynolds collected a pair for the Pirates, who had won the first two games of the series 6-4 and 10-2.