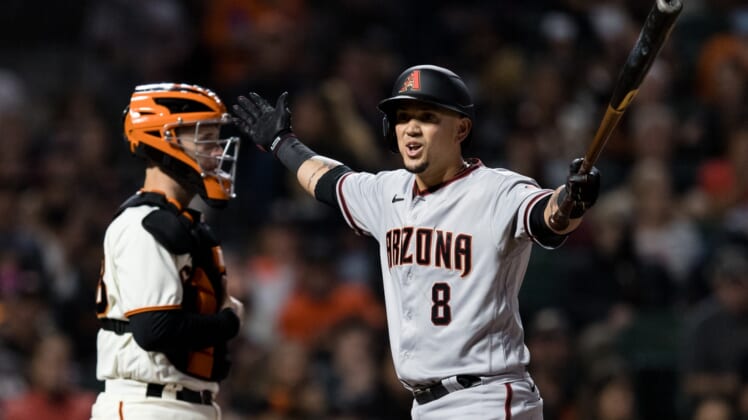 Old pals Buster Posey and Brandon Crawford got the better of left-hander Madison Bumgarner in his San Francisco reunion Thursday night, but it was a walk-off single by LaMonte Wade Jr. that eventually lifted the Giants to a 5-4 victory over the visiting Arizona Diamondbacks.

With a sweep of Arizona that completed a 17-2 demolition for the season series, the Giants (105-54) remained two games up on the Los Angeles Dodgers (103-56) entering the final three games of the regular season.

The Giants wrap up at home against the San Diego Padres, while the Dodgers host the Milwaukee Brewers.

After rallying from a 3-0 deficit, the Giants pushed across the game-winner in the ninth. Wilmer Flores doubled with one out, Donovan Solano was intentionally walked and Curt Casali drew an unintentional walk from Joe Mantiply (0-3), loading the bases for Wade.

While Giants fans were awaiting their former World Series hero taking the mound in the last of the first, the Diamondbacks jumped on San Francisco starter Scott Kazmir for three runs in the top of the inning. Carson Kelly and Pavin Smith drove in runs with singles, before reliever Kervin Castro, in for an injured Kazmir (leg injury), walked Geraldo Perdomo with the bases loaded to make it 3-0.

After a nice ovation, the first two Giants greeted Bumgarner with hits, with Darin Ruf’s double driving in Austin Slater, who had singled.

Posey had two RBIs against his old batterymate, one on a sacrifice fly in the third and another on a double that tied the game at 4-4 in the fifth.

In between, Crawford belted his 24th home run of the season, a solo shot.

Bumgarner was pulled after five innings in a 4-4 game, charged with all four runs on eight hits. He struck out four and did not issue a walk.

Arizona’s fourth run was the product of an Ildemaro Vargas triple in the fifth.

Tyler Rogers (7-1), who worked scoreless eighth and ninth innings, was credited with the win.

Kazmir faced just six batters, allowing three runs on three hits while getting just one out. He walked two and didn’t strike out anyone.

The left-hander was starting in place of Johnny Cueto, who returned from a strained right elbow to throw 2 1/3 innings of relief. He allowed Arizona’s fourth run.

Slater finished 3-for-3 with three runs scored, while Ruf added a pair of hits for the Giants, who have won six in a row.

Christian Walker had four hits and Kelly a pair for Arizona, which lost its fourth straight.