Lamarcus Joyner Will Cross-Train at Safety for Raiders 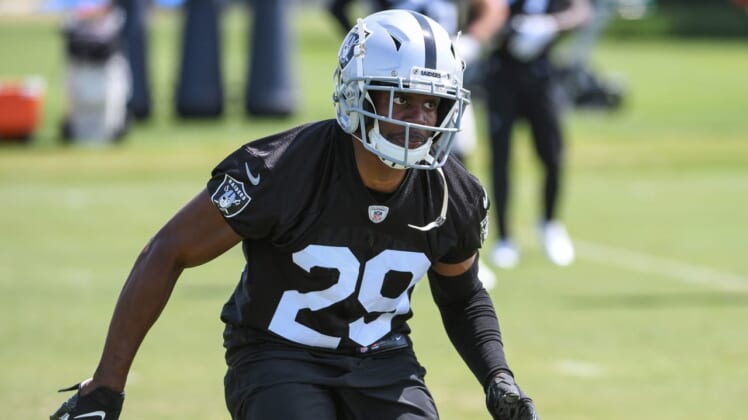 In an interview on Silver and Black Today on CBS sports Radio 1140 in Las Vegas, Las Vegas Raiders defensive backs coach Jim O’Neil gave some hints on where we might see Lamarcus Joyner line up in 2020.

Will Lamarcus Joyner eventually move to safety? File that under frequently asked questions within the Las Vegas Raiders fanbase but a question the team’s defensive backs coach Jim O’Neil was ready to talk about.

Right now, the answer remains inconclusive, but the Raiders are aware of Joyner’s versatility. Jim O’Neil talked about the subject on Silver and Black Today with Scott Gulbransen Sunday.

“When we went out and got Lamarcus Joyner in free agency, we thought he was a difference-maker at the nickel position,” O’Neil said. “For us, he’s a nickel first. This year, we are also training him to play some safety.”

For those who want to see Joyner play more snaps at safety, O’Neil’s comments suggest there’s a chance we could see the six-year veteran move around in the upcoming season.

However, the Raiders defensive backs coach didn’t say the team would change up roles on the back end, but it seems as though Joyner will be prepared if necessary.

Between the 2017 and 2018 campaigns with the Los Angeles Rams, Lamarcus Joyner took a majority of snaps at free safety. According to Pro Football Focus, he logged one play at the position last year as a member of the Silver and Black. The Raiders chose to use him in the slot where he lined up for his first three pro years.

O’Neil talked about the importance of the slot position in the Raiders’ scheme and confirmed the team’s heavy use of the nickel alignment.

“Our nickel is on the field 80 percent or more of the snaps,” he said.

Despite the excitement for rookie fourth-rounder Amik Robertson, who profiles as a 5’8″, 187-pound slot cornerback, Joyner will likely continue to man the spot for most the upcoming term. O’Neil talked about the required athleticism and football instincts to play the position. Because of the veteran’s experience, expect the Raiders to lean on him to solidify that starting role until further notice.

Keep in mind, Robertson lined up on the outside at Louisiana Tech. Although his size fits the slot position, he may take some time to transition inside. On the other hand, the rookie cover man has shown a tendency to find the football (14 interceptions) and step up to support the run.

Secondly, take a look at the projected safeties going into the 2020 season. Johnathan Abram is expected to return after he tore his labrum in last year’s season opener. The Raiders signed Damarious Randall, who caught general manager Mike Mayock’s attention as the best safety in the 2015 draft.

With Abram back and Randall in the fold, the Raiders don’t need to make any shifts on the back end yet. They invested a first-round pick in the former, and the latter has performed at a high level in the deep safety role with the Cleveland Browns during the 2018 season, logging 72 solo tackles, nine pass breakups and four interceptions.

In coverage, Joyner had his best year at free safety with the Rams, recording three interceptions and nine pass breakups. Although he didn’t make a lot of impact plays out of the slot last year (three pass breakups), the 29-year-old will have another year to play up to his four-year, $42 million contract. With those figures, the Raiders would likely prefer to see him build off continuity as opposed to moving him right away.

In the best-scenario, Joyner would become the difference-maker as the Raiders envisioned last year. If not, the coaching staff has alternative options.

Perhaps Lamarcus Joyner’s cross-training salvages his role in the secondary. If he takes more snaps at safety, Randall can slide into the slot position where he played 246 snaps during the 2017 campaign with the Green Bay Packers, per Pro Football Focus.

If Robertson is a quick study, he could simply move into the starting nickel spot, but that’s a tough task with so much uncertainty concerning the offseason. The league doesn’t have a timetable to resume on-field practices because of the coronavirus pandemic. Without the physical aspect of the rookie’s early development process, the coaching staff will probably rely on a veteran at a critical position.

Last season, Nevin Lawson played the second-most snaps out of the slot (95), per Pro Football Focus. Don’t forget Keisean Nixon, who flashed during the 2019 preseason and plays with the physical traits needed to line up in the slot.

Unlike the previous season, the Raiders have more flexibility on the back end, which will allow the team to move players around in case of injuries or if projected starters underperform early in the year.

Keep an eye on Randall, who can play all five spots in the secondary. Play-caller Paul Guenther tends to move around at least one versatile defensive back like Marcus Gilchrist in 2018 and Daryl Worley in 2019.

Of course, the team hopes to see Lamarcus Joyner and a revamped defensive back group click together with essentially three new full-time starters in Abram, Randall and rookie cornerback Damon Arnette.