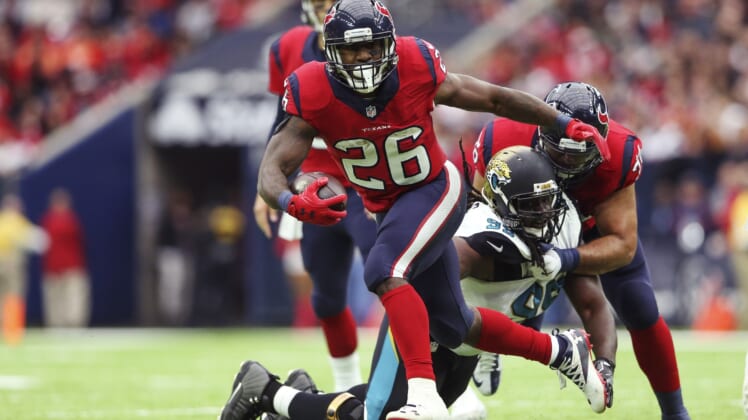 The Houston Texans will be without star running back Lamar Miller on the road Sunday when they take on the Philadelphia Eagles.

Miller, along with receiver Keke Coutee and nose tackle Brandon Dunn, did not travel with the Texans to Philadelphia and has been ruled out of the contest.

#Texans WR Keke Coutee, NT Brandon Dunn and RB Lamar Miller will not travel with the team to Philadelphia and have been downgraded to OUT for Sunday’s game against the Eagles.

The running back has been limited in practice this week with an ankle injury that was previously described as “not major.”

#Texans RB Lamar Miller injured his ankle in last night’s win over the #Jets, but sources say it’s not major. There is a chance he’s back next week, but either way, it won’t affect him in the playoffs.

Given the fact that Miller was able to at least participate in practices this week on a limited basis, there really shouldn’t be any reason for fans to be concerned about his availability for the playoffs.

In 13 games this year, Miller has tallied 917 yards and four touchdowns on the ground. He famously ripped off a 97-yard touchdown run against the Tennessee Titans in the final weekend of November and has been a major contributor much of the second half this season.