Lamar Jackson thinks Ravens extension will get done before season 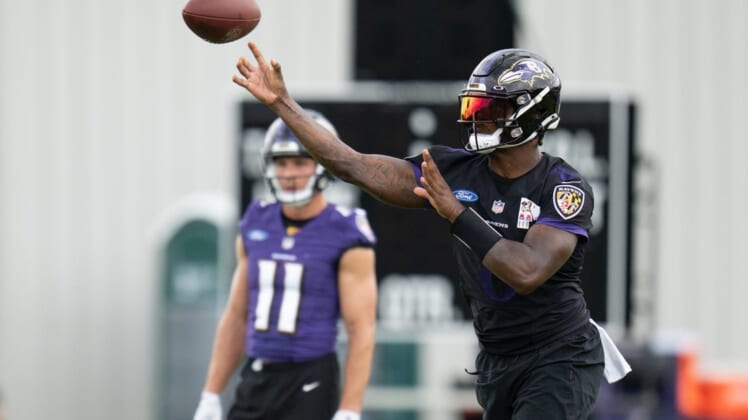 Lamar Jackson believes he will reach an agreement on a contract extension with the Baltimore Ravens before the regular season begins.

“I think so. I think so,” Jackson told reporters Thursday. “We’ll have to see.”

The star quarterback and 2019 NFL MVP added that there’s likely to be a “cut-off” before the start of the season where negotiations would be tabled if an extension isn’t in place.

Jackson said the parties have been discussing an extension “whenever we have free time.”

Jackson, entering his fifth NFL campaign, has maintained a laid-back attitude toward the negotiations throughout the year. Ravens general manager Eric DeCosta said in March that Jackson appeared to be in no rush to get to the negotiating table.

“I think it takes two sides to actively put their heads together and get a deal worked out,” DeCosta said at the time. “We are ready to be there for Lamar at any point when he decides that he really wants to work on it, we will be.”

The quarterback market evolved over the course of the year, to the point where Kyler Murray, who was drafted a year after Jackson, received a five-year, $230.5 million extension this month with $160 million guaranteed.

Murray and his camp made their negotiations with the Arizona Cardinals public, with reports leaking out that Murray wouldn’t play for Arizona without a new deal. Jackson was asked Thursday why he decided to report to camp and practice with the Ravens while his contract future was unsettled.

Jackson is currently slated to earn $23 million this season due to his fifth-year rookie contract option being picked up the Ravens in April of 2021.