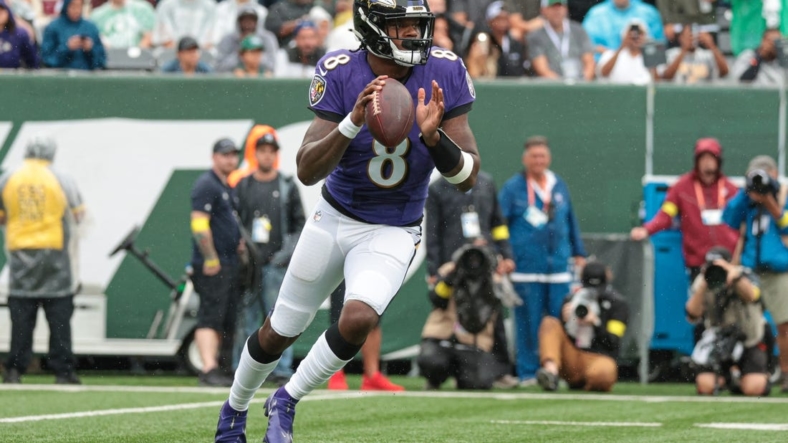 Lamar Jackson threw three touchdown passes in his first action since a season-ending injury last year to lead the Baltimore Ravens to a 24-9 victory over the host New York Jets on Sunday at East Rutherford, N.J.

Jackson, who missed the Ravens’ final four games after bruising a bone in his ankle in Week 13, went 17-of-30 passing for 213 yards, with an interception and two touchdown passes to Devin Duvernay while another went to Rashod Bateman.

Jackson, who was the Ravens’ leading rusher last season, added 17 yards on the ground in six carries, while Kenyan Drake rushed for a team-high 31 yards on 11 carries.

Duvernay, who had two touchdown receptions over the entire 2021 season, caught a 25-yard score in the second quarter and a 17-yard TD that gave the Ravens a 17-3 lead with 7:14 left in the third quarter. He finished with four catches for 54 yards.

Jackson hit Bateman in stride for a 55-yard touchdown to push the Ravens’ lead to 24-3 with 2:06 left in the third quarter. Bateman had two catches for a team-high 59 yards.

The Ravens ended a six-game losing streak dating to last season by getting the best of a key player from their past: Joe Flacco.

Playing in place of injured Jets starter Zach Wilson, Flacco went 37-for-59 for 307 yards with a touchdowns and an interception. He was Baltimore’s starting quarterback from 2008-18.

Under Flacco’s guidance, though, the Jets were just 2 of 14 on third-down conversions.

The Jets, who have lost 13 straight games in September dating to 2018, trimmed the lead to 10-3 on Greg Zuerlein’s field goal with 24 seconds left in the half.

Michael Carter led the Jets with 60 rushing yards on 10 carries, while Corey Davis had six catches for 77 yards.